The political landscape of Lagos State is undergoing remarkable transformation with young but vibrant politicians daily displacing once influential gladiators in the scheme of things in the state, Business Hallmark findings can reveal.

While some of the old warlords still have what it takes to dictate the direction as well as draw the political map of the state, the new masters of the game are determined to stamp their authority in their controlled enclaves.

According to findings, the last three general elections have thrown up some faces, even as many of the old leaders still around now battle for relevance. These personalities are not really new faces on the bloc as they have been around in the politics of their respective localities for quite some time, but not have grown in stature in the last tew years.

Business Hallmark examines the backgrounds of some of the new Turks who are gradually taking over from the old and disappearing warlords. Some of the new entrants threatening the dominance of their hitherto ‘godfathers’ are the Speaker of the House of Representatives, Femi Gbajabiamila, Speaker, Lagos State House of Assembly (LSHA), Hon. Mudashiru Obasa, Senator Adeola Olamilekan, former Governor Babatunde Fashola, son of the founder of the influential Justice Forum, Deputy Governor of Lagos State, Dr. Femi Hamzat, among others.

Unarguably the most prominent among the new Turks are the state deputy governor, Femi Hamzat and the Speaker of the state house of assembly, Mudashiru Obasa. The two wield enormous power in their areas of influence, which made some political observers to name them as persons to watch out for in the future.

Though the speaker, Lagos State House of Assembly, Obasa, is more of a grassroot mobiliser who dominates the political landscape of Agege, a suburb of Lagos, the deputy governor, who is the scion of the late founder of the influential Justice Forum, a political pressure group within the Lagos All Progressive Congress (APC), Oba Olatunji Hamzat, is more grounded due largely to his connections to Justice Forum.

BH reliably gathered that Hamzat inherited the political structure left behind by his late father, a traditional ruler of Afowowa Sogade in Ogun State, making him a force to be reckoned with in the affairs of the state.

Until his death, the monarch was a rallying point in the political equation and a factor to reckoned with. His influence extended to Mushin, Kosofe, Ifako Ijaiye and Epe. Part of the reasons Oba Hamzat remained politically influential even until his death, it was gathered, was his ability to hold Mushin politics intact and his popularity across Lagos East, especially in the Epe division where his son, Obafemi, harnessed as base to aspire for the party’s governorship ticket in 2015 and 2019. 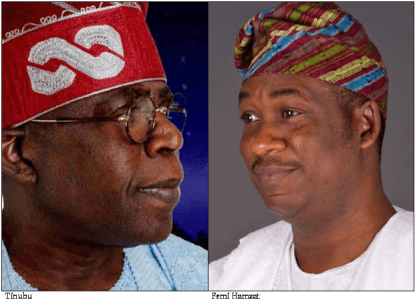 His son narrowly missed being elected the state governor in 2015 when he was adopted by the former state governor, Mr. Babatunde Fashola. However, several factors played against him. The undisputed leader of the party in the state, Asiwaju Bola Tinubu, had instead, tapped another candidate, former governor Akinwumi Ambode for the office, resulting in the splitting of the state chapter of the APC into two.

Matters was made worse for the deputy governor when the controversial traditional ruler of Lagos, HRM Oba Rilwan Akiolu, dabbled into the fight  during a public function ahead of Lagos APC governorship primary in 2015 vowing that he would not close his eyes and allow the son of a foreign king to govern Lagos.

At the end of the primaries, Femi Hamzat narrowly lost to Ambode, and missed the chance of governing the state. However, it was learnt that his late father advised him to hold his peace and not display any act of disloyalty to powerful party leaders, while at the same time prepare for another opportunity when it will be almost impossible to stop him.

That opportunity came in 2018 when the time came to elect a governor to run the affairs of Lagos for another four years. Femi Hamzat, buoyed by the support from the influential Justice Form, threw his cap into the race.

He was on the path of almost losing out again when the Lagos State chapter of the APC erupted in crisis over the decision of the of the Tinubu-controlled Mandate Group (MG) not to allow the sitting governor, Akinwumi Ambode, a second term.

However, the nomination of Tinubu’s candidate, Babajide Sanwo-Olu, received stiff opposition from many fronts, including the incumbent governor Ambode, his predecessor, Babatunde Fashola, and some cable in the presidency.

Fearing a crushing and humiliating defeat of its choice candidate, Sanwo-Olu, in the governorship election, the Tinubu faction in the APC approached the leaders of the Justice Forum. At the end of the negotiation, JF was offered among several concessions, the deputy governor’s slot, thus paving the way for the emergence of the current deputy governor.

Though the deal had put the deputy governor and his group in an advantageous position, our correspondent gathered from the grapevine that there are subtle underground plots by members of the Mandate Group to whittle down the influence of Justice Forum.

“The belief in the Mandate Group is that if not for Oba Hamzat’s influence, Tinubu would have had almost absolute control of the APC in the state. Now that the Oba is no more, some hawks in the MG think that the political influence of JF has waned and that his surviving stalwarts are old and frail and cannot hold on for long against a deliberate and sustained assault”, a chieftain of the APC in Lagos confided in BH.

“While the death of the founder of Justice Forum is causing jitters among members of Justice Forum, the deputy governor will also not be able to drink from the fountain of his political knowledge and deep understanding of the dynamics of the state’s politics”, he added.

In spite of the identified obstacles in the way of the deputy governor, there is no doubt that he and his group are going to be relevant in the scheme of things in the state.

Another politician that has established himself as a major force in the APC is the current Speaker of the House of Representatives, Hon. Femi Gbajabiamila. Gbaja, as he is fondly called in his Surulere stronghold has paid his dues to be recognised as one of the leaders of the APC in Lagos. A fifth time national lawmaker, Gbajabiamila came to limelight when he was elected the minority leader of the House of Representatives in 2003. He continued to occupy the office after his election in 2007 and 2011 until his election as majority leader in 2015 when the opposition APC dislodged the ruling Peoples Democratic Party (PDP) in the lower chamber and took control.

In June 2019, he assumed leadership of the House as speaker and effectively became the number four citizen in the country. His growing popularity and influence were visible to all with the huge crowd of supporters that welcomed him to Lagos last week at the Murtala Mohammed Airport, Ikeja, Lagos.

Though, Gbajabiamila initially came to power through the support and endorsement of the national leader of the APC, Bola Tinubu, he has been able to establish himself as a power broker, particularly in his Surulere constituency that he represents at the national assembly.

BH reliably gathered that he is well accepted by the low and the mighty in Surulere where he comes from, and that he has risen so fast in the party hierarchy that leaders of the party will think twice before making any attempt to stop him from recontesting as was done to former highflying lawmaker, Senator Olorunnibe Mamowora, who was unceremoniously dropped by Tinubu in 2011 when he tried to recontest for the Senate, thus truncating his political career.

“Except the party leaders want to witness an upheaval in the party, they can’t touch Gbajabiamila again. They made the mistake of allowing him to grow too big beyond their  control.

“His position is also largely guaranteed owing to his closeness and absolute loyalty to Tinubu. Watch out for him, he is surely going places”, said Chief Rotimi Badmus, an APC chieftain in Ifako-Ijaiye.

Apart from Gbajabiamila, the Speaker of the Lagos State House of Assembly, Hon. Mudashiru Obasa, has also broken into the class of political gladiators in the state. Obasa, it was learnt, has become a principality in the Agege constituency where he comes from. A grassroots mobilizer, energizer and organiser, Obasa is a fifth time lawmaker representing Agege Constituency 1. before that, he had contested the seat of councillor at Agege Local Government under the defunct Alliance for Democracy (AD), and won, which he served between 1999 and 2002.

His strength, according to informed sources, is the Agege streets, which he allegedly has in his grips. “The fear of Obasa is the beginning of wisdom”, said a community leader in Orile-Agege who did not want his identity disclosed for fear of retribution.

“He is in absolute control of the streets in the whole of Agege. Thugs, cultists vehicle unions (bus, taxi, okada, tricycle, tipper and trailer drivers and unions are all loyal to him. He can run you out of Agege just with the tweak of his fingers. There is almost nothing that could be done in Agege today without his blessing. In fact, the on-going Agege/Pen Cinema Fly over is his brain child. He virtually blackmailed the last administration into starting the project”, the source added.

However, he has a major minus, as he is said to be self-opinionated and strong headed, two fearful characters that make his party elders handle him with cautious and not trust him with too much powers.

Not the least among the many new Turks directing the affairs of Lagos State is Senator Olamilekan Adeola, senator representing Lagos West in the Senate.

Popularly called ‘Yayi’ by admires, the young and vibrant politician has established himself as one of the leaders of APC, even beyond Lagos State. He played a major role in the emergence of Senator Ahmed Lawan as the incumbent Senate president.

Following his decision to join active politics at the dawn of the 4th republic, the lawmaker was nominated and won the primary of the then Action Congress of Nigeria (ACN) as was subsequently elected as a member to represent Alimosho State Constituency 2 at the Lagos House of Assembly from 2003 to 2007 and again from 2007 to 2011.

Adeola was elected to the House of Representatives to represent Alimosho Federal constituency in 2011 where he served only a term before moving to the Senate in 2015. The extremely wealthy accountant is very influential within Alimosho zone, partly because of his wealth which he deployed to maximum benefits.

He is reputed to have ran the best campaign during the 2018 general elections in Lagos, even better than that of the incumbent governor. His closeness to Asiwaju Bola Tinubu has also served him well.

Except a political Tsunami happens, his political career is expected to bloosom beyond his present position.