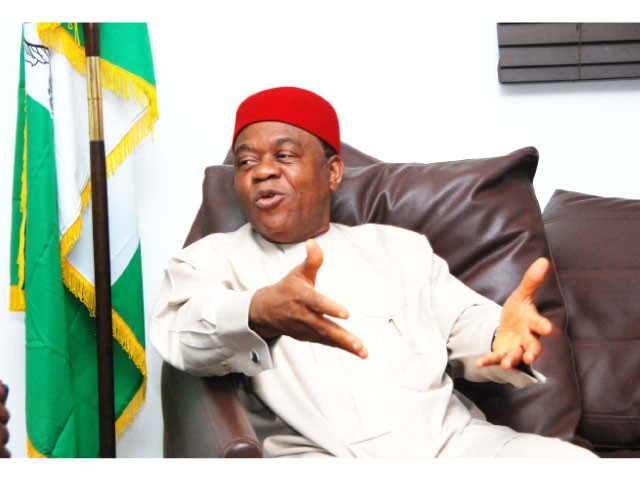 BY PETER OKORE, Umuahia
With barely three weeks to the end of the present administration in Nigeria, Abia state governor Chief Theodore Orji says he has built a new face of sustainable democracy in Abia within the eight years he has been in office. This is just as the state Chief Judge, Justice Theresa Uzokwe confirmed that Abia state judiciary under past military or civilian administrations have never had it so good in the state like now.

Both spoke, Monday, at the official commissioning of two newly constructed High Court complexes in Umuahia Judicial headquarters and another at Aba, respectively.

Governor Orji noted that the ceremony came, particularly, at a time when many critics of his administration were beginning to forget where this state is coming from in terms of durable infrastructure that served the needs of the people of Abia state and our democracy.

He said, ”it is worthy to recall that we arrived office in the governance of this state about eight years ago. Then we met a situation where there was little or near absence of the necessary institutions of governance that support democracy.

Top most on the list of such democracy institutions were the absence of a befitting Government House for the state; a comfortable workers secretariat to support our workforce; a descent court-room complexes to support our judiciary to perform its laudable role as an important tier of the democratic system and; a comprehensive, well furnished public information building that supports the workers of our state Broadcasting Corporation in the promotion of the right enlightenment that drives democracy“.

Orji described all the above institutions as very necessary for democracy to thrive and take roots in Abia state. “That is why this government quickly responded to the lack of institutional foundation-laying for democracy through our legacy projects”, he said.

According to the Governor,” Today, we can boast and beat our chest that all these required institutions of democracy have been restored in Abia state by this government. For us, this is the surest way of building the new face of a sustainable democracy in Abia state, which we all desire.
We are happy we took the right course to lay this foundation.
The High court we commissioned today is eloquent testimonies to the success of our efforts and our government’s resilience in the laying of a solid foundation for good governance and the stability of the state.

It is important that no-one, not even the critics will forget that no-other administration that succeeds our government will ever be bugged down again in the institutional framework we have already established for the state. They will concentrate on others, like repairing the dilapidated ones and putting up fresh buildings. We expect successive administrations to gain favourable mileage from our efforts so that they begin immediately by focusing on other important aspects of the development of our state that our people desire for the improvement of their lives”.

Emphasizing that the work of governance of any state as ‘a relay race, he said every race needs to begin well, especially, with the committed efforts and sacrifices of one administration that takes the brunt. “You set the template for others to take-off from and continue, adding that it is my belief that this government has done its duty for Abia state. We have made a positive impact on our state and our people through our legacy projects, such as we see today. We are certainly leaving the state better than we found it, he stressed.

Therefore, I thank all Abians, wherever they are, for all the supports you started giving me from2007 and will continue giving me until the 29th of this month.”
Orji also had some words for his critics:”To my detractors, I still extend my hands of friendship and fellowship to them. What is happening in Abia state is an eye-opener and should teach people a
lesson; that once the hand of God is on you, the enemies labour in vain”.

Drawing attention to the fact that the Tribunals would soon start work, the governor noted that people are now rushing for equity. He recalled that in 2007 he had over 20 cases challenging him at the Tribunal. He commended the judiciary for doing a very wonderful job, saying this is what prompted me to build this kind of edifice for them; so that when they are in there, God will be directing them to do the best that will please God and humanity.”
In her address of welcome, the state chief Judge, Justice Theresa Uzukwe said that the edifices would help in alleviating some of the problems besetting the Judiciary in the dispensation of justice, adding that other Judicial divisions and magisterial districts were also in serious need of court halls and other necessary infrastructure, especially, with the appointments of new judges and
magistrates in the state.
She described the new face of the state Judiciary as the best, among those she has visited in the South-East geopolitical zone of Nigeria.

Earlier, the governor presented a brand new Land Cruiser Jeep to the Chief Judge for her official use, saying that the office goes with lots of responsibilities. The governor noted that the gesture was spectacular; in the sense that Mrs. Uzokwe has become the first substantive Chief Judge Abia state had got for several years now. He observed that for many years, Abia state has been getting acting chief Judges.

He used the opportunity to commend the cordial relationship between the executive and Judiciary arms of government and prayed that such a close relationship should be extended to the in-coming government.
Responding the Chief Judge thanked Governor Orji for his kind gesture and promised to do her best to maintain the integrity of the judiciary.