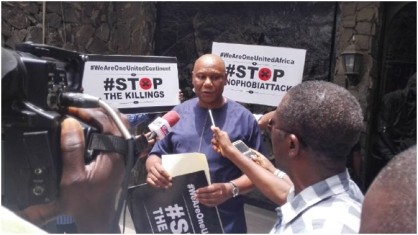 Mr. George Nesengane is the First Secretary Political, South African Consulate General, Lagos. He spoke with Hallmark’s Rume Oyitso on the raging xenophobic attacks in his country, while reacting to a letter written by APC Youth Wing to President Jacob Zuma and efforts his government is taking to tame it

What is your position on the protest by Nigerians who threatened to shut down South Africa’s interests in the country?

Firstly, my assignment is very simple, to accept the petition on behalf of the South African Consul General which I did. A group came in here and they voiced their disappointment over happenings in South Africa. We do not condone what is happening in South Africa. We are with everyone who is affected. As we speak now, the authorities; the government, the Police are pretty much involved in making sure that these unnecessary attack on foreigners should stop. The position we take also is that we are against xenophobic attacks at all cost. We have accepted the memorandum from the group of protesters and we are going to forward this memorandum to South Africa for further direction.

Can you give us an official tally of the number of Nigerian casualties so far?

As far as we understand, there are no Nigerians affected by this incident

Are you worried about the repercussion on South Africans living in Nigeria?

We have been here in Nigeria for many years, we have never had incidences of reprisal attacks, and I don’t think this will happen. We are brothers and sisters and we understand each other. What is happening in South Africa is not bearing at all on how Nigerians would react to South Africans. I think we live peacefully and in harmony with Nigerians here.

Nigerians are very outraged with the xenophobic attacks on Nigerians. They have also said that ‘we supported South Africans to re-gain their freedom from apartheid leaders and now South Africans are treating us this way in their country’. Do you think South Africans see other Africans as their fellow brothers and sisters?

This is a very difficult thing to explain because the vast majority of South Africans do not support these attacks. It is only few individuals who are engaged in these acts. Right now, the authorities are trying to sort out the situation.