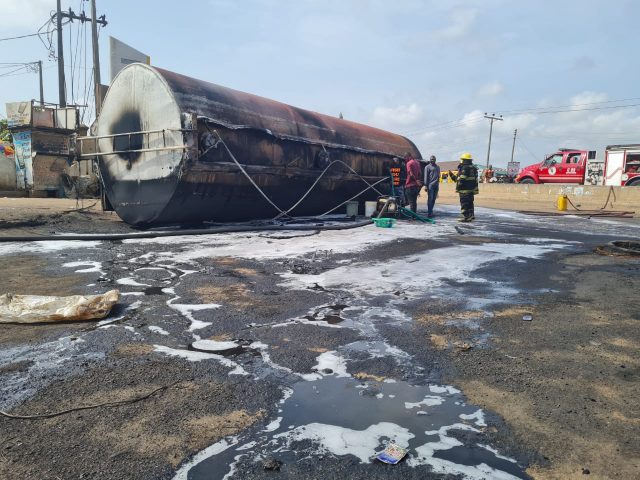 One individual has been confirmed dead in a petrol tanker explosion at Ajegunle Bus Stop, Alagbado, along Abeokuta expressway, Lagos.

BH had earlier reported that the tanker explosion which occurred at about 3am Friday, destroyed several houses, shops and shanties.

The tanker was said to have spilled its content while negotiating a bend to the filling station.

It subsequently caught fire when people started scooping the spilled fuel which had spread through makeshift structures on the roadside.

Margaret Adeseye, the director of Lagos Fire and Rescue Service, who gave an update on the incident, said the fuel-laden tanker was meant to service Ayinde Oil Filling Station at Ajegunle.

“The spillage spread through some makeshift structures on the roadside and attracted residents who risked their lives to scoop the PMS with containers of various types resulting in the ensuing fire,” she said.

“Unfortunately, a male adult was recovered suspected dead likewise three various brands of vehicles involved in the Fire aside the Tanker and Shops.

“The situation is however being brought under control by the Agege, Ikeja and Alausa Fire Crews of the Lagos State Fire and Rescue Service with the use of tactical Firefighting application of Chemical Foam Compound to suppress the Fire.

“The public is advised to exercise caution along the axis as the evacuation of the burnt tanker progresses while outbound Lagos vehicular traffic has been temporarily diverted to inbound vehicular traffic.

“Emergency responders are still at the scene to ensure that all hindrances to free movement and wreckage of the tanker are removed promptly.”