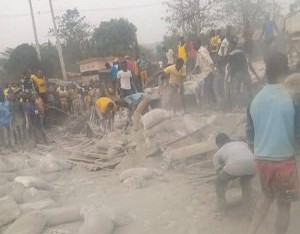 At least 12 persons, mostly students, are confirmed dead while search continues for others in an accident that occured near the entrance gate of the Adekunle Ajasin University, Akungba-Akoko in Akoko South West local government Area of Ondo State.

The accident was said to have occured when a truck coming from Obajana in Kogi State lost control and rammed into some shops and crushed both students and traders.

According to eye witnesses, 12 dead bodies have been taken to the mortuary while others were still in the rubble and heap of cement.

It was gathered that many of the vicitms were in the shops transacting business.

“The truck caused the accident due to break failure. The driver lost control and the truck rammed into the shops,” Nation quoted an eye witness to have said.

“The incident caused traffic gridlock at the busy road as many of the vehicles were held for hours in the town.”

Ondo Police spokesman, ASP Tee-Leo Ikoro, confirmed the incident but said eight bodies have been recovered from the scene of incident.