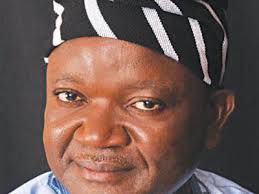 He said issues about the resources of the state have to be clarified.

‎Fielding questions from journalists after meeting with President Muhammadu Buhari at the Presidential Villa, Abuja, Ortom said due process and the rule of law will be followed in the process of the probe.

The governor, who said his visit to the president had not included Suswam’s probe, added that there are questions bordering on the financial resources of the state that must be answered and the citizens of the state were eager to know the truth.

“The law will take its course. We know that just like the Federal Government, my government believes in the rule of law and due process.

“I met a deficit treasury and the people of Benue State want to know what happened with their money, what happened with the SURE-P money, what went wrong with the excess crude money that came to Benue State, what went wrong with the shares of government in various corporations that were sold, where did the money go? These are questions that are begging for answers, which the people of Benue State told me to verify and I am doing that”, he said.

Though the former governor had gone to court to procure an injunction, Ortom said the state government was confident of a favourable ruling on November 9 when the court rules on the matter. ‎He said after verification is complete he would ensure that due process is followed in the handling of the matter.

The former Benue governor is also facing trial on a nine-count charge by the Economic and Financial Crimes Commission (EFCC) bordering on money laundering to the tune of N3.1 billion.

He is to be arraigned on Wednesday at a Federal High Court, Abuja.

The governor also told journalists that he was at the Villa to brief the president on ‎the security and economic challenges facing the state, adding that he has been able to access the bailout fund and had started to clear salary arrears.

“We are already paying our workers. We have accessed the N28 billion, which we are paying as arrears inherited from my predecessor. We also thanked (president) for appointing our son as a minister of the Federal Republic”, he said.

On the issue of security, Ortom said he had been able to restore substantial peace and order in the state, having‎ being able to rein in the crisis between herdsmen and farmers through dialogue and understanding.

‎He further explained that on “the issue of criminality and kidnapping, raping, armed robbery and killings for which we introduced the amnesty programme, about 700 youths came forward to embrace the amnesty and surrendered over 400 different types of weapons and ammunitions”.