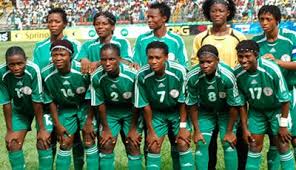 The Super Falcons will be given the honour of being the first Nigerian National team to use the new Nike kits in a competitive game when they lock horns with Mali in an Olympics qualifying match on May 9 in Abuja.

This has been confirmed by the General Secretary of the Nigeria Football Federation (NFF), Mohammed Sanusi, who disclosed this when he visited the team at its training centre in Abuja, and also charged the Falcons to launch the jersey in style by beating Mali with a heavy scoreline.

“I urge you to be disciplined and desist from acts that will bring problem between Nike, our new kit sponsors and the Federation. I must say here that one of the problems we had with Adidas was because some players were not respecting the terms of the contract. I urge you to assist the NFF in every contract we enter into,” he was quoted on the NFF website.

Sanusi also charged the team to go to World Cup in Canada and do the nation proud noting that they have not done well at previous editions. He said that he expects Falcons to better their previous outings at the World Cup by going far in Canada.

“We have confidence in your capability to take on the best teams and come out victorious. You must break that jinx of not doing very well at this stage by making discipline at training and matches your focus. The NFF will support and motivate you to achieve your target,” he concluded.