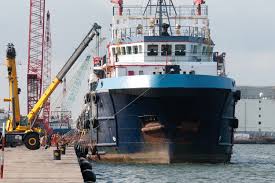 Concerned maritime stakeholders have condemned what they described as needless persecution of AlhajiLamidoSanusi Ado Bayero, the new Managing Director of Nigerian Ports Authority(NPA) over the divested business interests of his late father, Alhaji AdoBayero, from Integrated Nigeria Services Limited(INTELS).

The new NPA helmsman has been confronted with controversy over the stake of his late father, the immediate past Emir of Kano, in INTELS, few days after he took over the reign of leadership at the Marina headquarters of the agency.

Critics have raised a moral question over the appointment of Ado Bayero as the new NPA MD due to his alleged business interest in INTELS, one of the port concessionaires which the NPA is meant to regulate.

But in a swift reaction, the family of the Ado Bayero, the NPA and INTELS have all denied such existing business interests and debunked insinuations of possible bias and preference for the port concessionaireagainst the other competitors.

According to the family, it was true that their late father held 10 per cent equity in INTELS but this was immediately disposed of after the death of the late sage in 2014, thereby leaving them with no stake whatsoever in the company.

AlhajiUsman Ado Bayero, who spoke on behalf of the family, stated that it no longer had any stake in the company after relinquishing its equity holdings nine months ago.

The family also confirmed that even while the late emir was alive, his first son, Sanusi Ado Bayero, was never part of the management nor held any board position at INTELS, stressing that the new Managing Director of the NPA is committed to best practice standards in corporate governance as he guides the affairs of NPA.

Both the NPA and INTELS managements all corroborated the position of the late monarch’s family, insisting that the royal family has ceased to have any link with the port operator.

However, some industry commentators expressed worry over the development which they described as unnecessary distraction to the new NPA MD.

‘’Why should the businessinterests of his father becomethe albatross on his son who is also known to have vast businesses independently of his father?’, a maritime operator queried.

It was however gathered that the new NPA MD was never interested in the business dealing of his father in INTELS as he was too much pre-occupied with his own businessendeavours.

A family source confided in this reporter that it was at the behest of the new NPA MD as the first son of the deceased, in consultation with other family members,that the 10 per cent equity shares in INTELS were sold and its proceeds shared to about70 members of the family, including children and widows of the deceased.

‘’A 10 per cent equity holding in a company is not a controlling share that will warrant this hullabaloo and more so when such equity was said to have been relinquished’’ another respondent noted.

‘’But since none of this scenarios occurred but the transaction was made when the new MD was never aware of his new appointment goes to show his sincerity of purpose which should mean that the fears of the competing concessionaires are unfounded’’, another concerned stakeholder contended.

Another source in the agency told this reporter that the concessionaires have no cause to worry as the new MD is a man of integrity and high moral standing who is not ready to compromise the good name of the Bayero family.

‘’With my interaction with the new MD, I am convinced that he is going to give all the operators a level- playing ground to operate without displaying any preference to any operator.

‘’He comes across to me as a man that is determined to make a difference and leave a legacy that would consolidate on the good reputation of the royal family’’, the source noted.

He also declared that this controversy would be the needed tonic that the new MD will now need to prove his critics wrong.