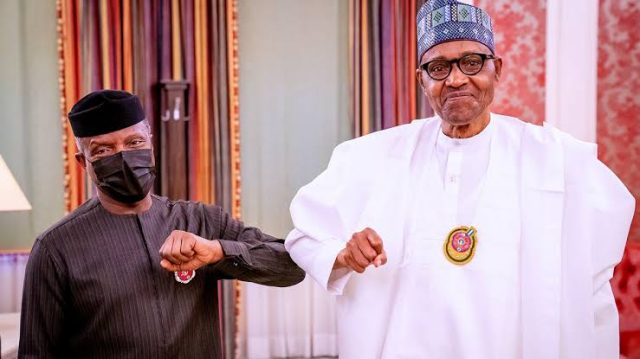 Vice President Yemi Osinbajo has noted that serving as vice president under President Muhammadu Buhari for seven years has equipped him with sufficient knowledge, information and experience to be able to hit the ground running from day one if, by the grace of God, he is elected to be president of this country.

Osinbajo made this assertion on Thursday during his meeting with APC delegates and traditional leaders in Cross River and Bayelsa States capital respectively, as he continued his consultations with stakeholders and delegates of the ruling All Progressives Congress across the country, a statement from Laolu Akande, his spokesperson, said.

The Vice President who was received by Governor Ben Ayade was also accompanied by stalwarts of the All Progressives Congress (APC) in the South-South geo-political zone and beyond, including Senator Victor Ndoma-Egba, former Minister Edem Duke, former NDDC Managing Director, Obong Nsima Ekere among others.

As is now common with all of the VP’s visits across the states, Nigerians from all walks of life on Thursday trooped out to welcome him as his convoy drove past the streets of Calabar and Yenagoa, the capital cities of Cross River and Bayelsa States.

The VP also paid courtesy calls on the traditional rulers in both states, where he was warmly received by the Obong of Calabar, Edidem Ekpo Okon Abasi Otu V, the Cross River State Traditional Council and the Bayelsa State Traditional Rulers Council.

In his remarks to the monarchs, the VP noted that his experience for the past 7 years has prepared him for the task ahead in 2023 and beyond, noting that he would not waste any time in continuing with the task of nation-building.

Speaking to members of the Cross River State Traditional Council, Prof. Osinbajo restated his reason to run for president, noting that Nigeria will surely overcome its economic and security challenges.

“The truth of the matter is that every country is faced with peculiar challenges – in our case, we are faced with security and economic challenges. But we also know that God Himself equips us with all the necessary resources to defeat every challenge. I believe very strongly that God helping us, our economic and security challenges will not only be dealt with but will be stepping stones for a greater nation and a more prosperous and secured nation.”

Speaking at the Palace of the Obong of Calabar, the VP restated the invaluable experience he has in government, as Vice President and at some point, Acting President.

“Your Royal Majesty and Paramount Ruler present, in my capacity as VP, I had the great fortune of working with President Buhari, who in every real sense exposed me to all one should know about governance at the highest level in our country. Our country is complex, diverse, and rich in resources, and with the diversity and various complexities, it obviously requires some experience. I have had the good fortune of serving for 7 years, observing first-hand the intricacies of our nation. On occasions also, I have served as Acting President of our country.

“I think that with all the experience I have been able to gather within that period, it is clear that God’s intention was that all that experience would become useful one day and I believe that that time has come when our country calls for a successor to President Buhari who by May 2023 by the grace of God, would have served for 8 years.”

While welcoming the Vice President to the State, the Obong of Calabar said the country needs more credible leaders and men of integrity. He added that he was happy that the VP was “standing up to take up the mantle of leadership in this country.”

Pledging support for the VP’s presidential bid, the Monarch said, “You have the experience, you are exposed, …your remarkable administrative display to the people. We appreciate you; we appreciate all you are doing.

“We don’t need to say most of these things now, but when the time comes, all we are praying is that you pick up the ticket, get the mandate. And at the time you step out to the field, most of us will show our support.”

Also speaking, Cross River State Governor, Ben Ayade, who had earlier received the VP at the Government House in Calabar, described the VP as his most respected senior professor, noting that “I have no doubt that he has the capacity to drive Nigeria’s hopes and dreams.”

“I have no worries about the Vice President’s ambition. I would like the people of Cross River State to carefully and attentively listen to him. He is a man of great intellect and value and he came in to respectfully honour our Obong.

“He (the VP) is someone that I share same ideas, hopes and aspirations with.”

“God doesn’t destroy what he has ordained, therefore, you are an ordained man of God who is now into politics. All the weapons formed against you will not prosper because you are in the hands of the Almighty at all times,” Dr Etim prayed.

The Vice President then proceeded to Bayelsa State where he was received on arrival at the airport by the State Governor, Douye Diri, and senior state government officials.

After a befitting reception at the airport, the VP proceeded to meet with the Council of Traditional Rulers, stating his mission to the area.

According to Prof. Osinbajo, “as Vice President, I’ve served under a President who has given me every opportunity to understand and see for myself and observe at very close quarters, all of what is required to run this very complex, very diverse nation called Nigeria.

“I’ve also served on different occasions as acting President when the President was away and that has also given me more than an insider’s view of how to effectively rule this country with its various challenges.”

In the same vein, the Vice President sought the support and partnership of APC stakeholders in Bayelsa in continuing with the transformational work of the party at the national level. He returned to Abuja last night.

He has since resumed consultation with APC stakeholders visiting Anambra and Enugu States today.