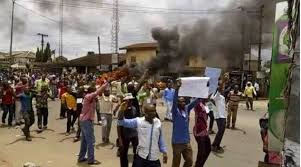 Akwa Ibom State indigenes have shutdown Uyo and its environs over irregularities and snatching of ballot boxes by the people they described as the Peoples Democratic Party (PDP) thugs during the Governorship and House of Assembly elections that took place across the 31 local government areas on Saturday.

The protest was triggered by the on-going announcement by the State’s Independent National Electoral Commission which clearly shows the PDP leading where most of the protesters claimed no election took place.

The protesters are of mainly of the All Progressives Congress (APC).

They mounted road blocks along the popular Oron Road near Asong Ama by Udo Udoma junction with a call on INEC to stop the announcement of the results.

The protesters were prevented from entering Udo Udoma Avenue by the heavily armed security operatives that used their Armoured Personnel Carrier (APC) and Hilux patrol vans to block the road to avoid the disruption of the results announcement.

Also, an helicopter was sighted hovering round Uyo.

Some of the protesters carried placards with various inscriptions. Some of the inscriptions on the placards read: “PDP ran away with our ballot boxes. Our votes must count. INEC should stop announcing the results. Akpabio should stop using police to intimidate us.

Others read: “No election took place in many of the Local Government Areas yet INEC is announcing results. Let the wishes of the people prevail. Akpabio wants to turn Akwa Ibom to his personal estate. He wants to impose Udom Emmanuel to cover up. We won’t allow this. We want cancellation of results.”

The Protesters, who dared the police to shoot them, also alleged that after snatching ballot papers thumb printing of ballot papers were done in the houses of serving commissioners in Governor Godswill Akpabio’s house.

During the polls, there were reported cases of violence in almost all the 31 local government areas with political parties agents accusing the PDP thugs of snatching ballot papers.

Attah, who was also disenfranchised, said he could not cast his votes because INEC officials informed him that electoral materials had been carted away by gunmen.

Attah explained that not only in his unit but several units across the state there were no elections.

He said at his unit, the Police Public Relations Officer, pleaded that I should ensure that my people do not make trouble.

“I told INEC I have come to vote. So I will like to do my accreditation. They said sorry sir. It is not possible. I asked why is it not possible? They said at the distribution of electoral material centre that people came with Machette, guns and shot in the air. They carted away all the materials including even the INEC card readers.

Not just in my unit, several units in my area. They (INEC) arrived there without any electoral materials and card readers.

“The violence of shooting and attacking was so wide spread. Carting away of election materials including card readers? What does anybody wants to do with a card reader? My appeal which I have made to everybody that is prepared to listen to me is to accept the fact that truly there were no elections in Akwa Ibom State.

“So that people will now be forced to do proper elections. I now begin to understand why Akwa Ibom state is regarded as a battleground. I didn’t come to fight, I only came to do an election. I witnessed police in uniforms carting away ballot boxes.”