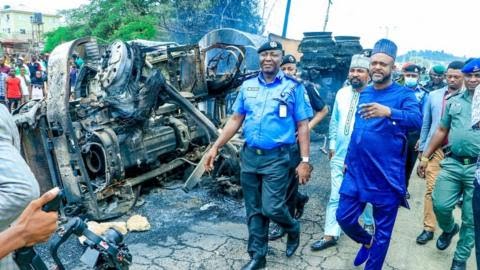 The Kogi State Police command has said it received the news of the unfortunate tanker fire accident that claimed not less 25 lives, including school children and polytechnic students in the state on Wednesday morning.

The accident occurred in Felele, Lokoja when a tanker loaded with PMS coming from Okene axis failed brake while the driver lost control and hit a Tricycle, then the tanker fell down consequently engulfed with fire.

The police command which expressed sadness over the accident in a statement by its public relations officer, DSP William Ovye Aya, said during the unfortunate incident, six vehicles, four tricycles, two Motorcycles, two shops, NEPA high tension pole, two buildings and about twenty five persons whose identity is not yet known got burnt completely beyond recognition. 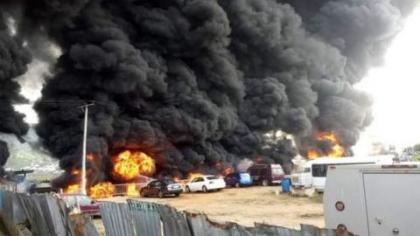 According to Aya, the Commissioner of Police Kogi State Police Command, Ede Ayuba Ekpeji was at the scene for on the spot assessment. He ordered that all the corps be taken to Kogi State Specialist Hospital Mortuary Lokoja.

He said the Commissioner of Police on behalf of Officers and men of the Kogi State Police Command wish to extend his heartfelt condolence to the family of the victims as well as the Kogi State Government over the unfortunate incident and the lost of lives and properties.