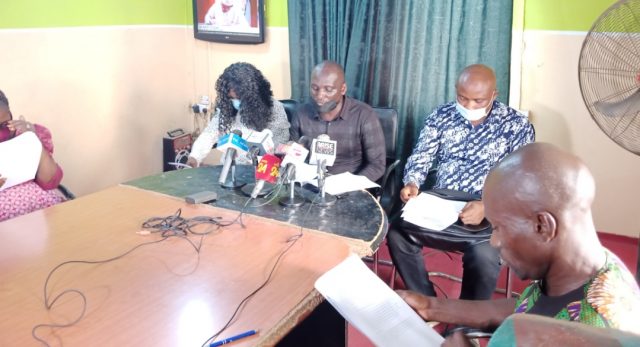 The governorship primaries of the All Progressives Congress (APC), Osun State conducted last Saturday has been described as a mockery of democracy and an exercise marred with irregularities.

This is according to the Coalition Of Civil Societies Of Nigeria (CSOs).

Addressing press conference at the NUJ Correspondents’ chapel, the civil society groups said the APC primary was grossly marred by violence, issues of electoral irregularities, lack of sensitive materials like result sheet, operational and logistical challenges, security issues among others.

Presenting a communique on their observation of the election, the leader of the team, Patrick Usman of the Centre for Development of Democracy and Good Governance in Nigeria, said the election was biased, recommending that the national secretariat of the APC should investigate the irregularities reported in the election.

Some of the identified irregularities, according to the CSOs are lack of accreditation in the wards where they observed the election, non-availability of result sheet, disenfranchisement of voters, among others.

The communique reads in part: “In majority of the wards where we visited in the affected local governments, there was no accreditation. In few places where accreditation held, it was a shambolic show, filled with pretence. Ward 15, Oyan, Odo-Otin LG, Ward 5, Apomu, Isokan LG, Ward 8, Ilesa East LG, Ward 8, Ayetoro, Osogbo LG, Ward 2, 4 and 5 also in Osogbo LG and other places are example of this irregularities.

“Our team observed and note that there was generally non-availability of result sheets at the wards where we observed the election. In some cases, ordinary A4 papers and official letter head of the party were used instead.

“We don’t know who is who, but there are complaints from party members that government officials who are appointed by the Governor (who is also an aspirant in the election) were used as Returning Officers instead of the officials of the Independent National Electoral Commission (INEC). There was no any INEC official in all the wards.

“Violence was recorded in some voting centres in some of the wards. In Osogbo, Boripe, Ede, Ilesa East and Oriade LGs, thugs were stationed at every ward and electorates were chased away from the voting centres.

The CSOs concluded that: “The election fell short of acceptable international standard as it was grossly marred by violence, issues of electoral irregularities, lack of sensitive materials like result sheet, operational and logistical challenges, security issues among others.

“Party primaries are to be free, fair and credible as it is the basis for good governance. The election is a mockery of democracy and a suppression of peoples will. The primary election cannot stand the scrutiny of parameters for a free and fair election.”