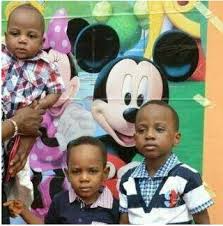 The three Orekoya kids kidnapped by a house-help have been found and reunited with their family.

Their father, Mr Adeleke Orekoya on Wednesday disclosed in a message via WhatsApp that they have been found in Lagos

When their Lawanson, Surulere, Lagos home was visited, family members were in joyous mood.

They were seen going through the story of the kids published in a national daily.

They said that Mr Adeleke Orekoya, his wife, Bisi have taken the children to hospital.

When contacted on phone, Mr Orekoya confirmed the reunion of his kids.

He thanked Nigerians for staying by the family. According to him, the family intends to hold joint briefing with the police at 7pm later Wednesday.

Orekoya said that the kids have been in hospital since last night.

The house-help, Mary Akinloye kidnapped the kids, Demola, 6; Adedamola, 4, and Aderomola, 11 months, 24 hours after she was employed by the family via OLX, an online sales portal.

The kidnappers had earlier demanded for a ransom of N13m which the parents said they could not afford to pay and pleaded for the release of their children.