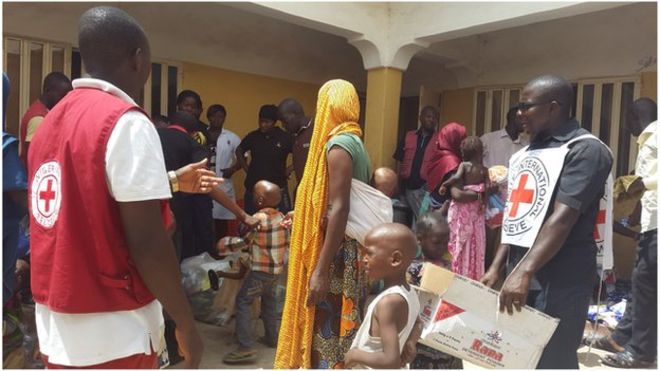 They queued up for brand new clothes and flip-flops – cellophane-wrapped dresses for the girls and matching shirts and shorts for the boys.

For the rescued children this donation, from Red Cross Nigeria and the International Committee of the Red Cross (ICRC), was the first chance to get out of the tattered clothes they had been wearing for months, since the very day they were kidnapped by Boko Haram.

Handing out clothes to the women and children as well as buckets, towels and soap is the easy part. It is much harder to help them recover from the physical and psychological damage.

“I saw death when I was with Boko Haram. I lived with death,” says Margaret.

“It’s only God that saved me. But I’m not the same person now.”

Her two-year-old daughter, Halima, is asleep on her lap, as her young son Jacob, 4, cries relentlessly from fever and struggles to sit up on the bed beside her.

“We saw so many ugly things. People were slaughtered with knives in front of us. It has changed my view of the world completely,” she told me.

Margaret escaped from captivity several months ago so it was surprising to find her amongst the just rescued women and children. She was there for an extraordinary reunion.

When Boko Haram gunmen stormed her village near Damboa late last year Margaret was abducted along with Halima and Jacob. But she had three other children, aged 6, 8 and 10, back at home – with no one looking after them. With the jihadists terrorising the towns and villages, killing and abducting, Margaret was worried sick about their safety.

“So I just took the risk and fled with Halima,” she said adding that it would have been impossible to escape carrying both children. She took the painful decision to leave Jacob in the jihadist camp and begged another abductee, 20-year-old Hauwa, to look after him.

I met Hauwa in another room of the school that is a temporary home for the rescued women and children.

“We really suffered there. We were beaten if we didn’t pray. Every day we were beaten,” she tells me. Many of the children fell sick because they were eating so badly in the jihadist camp in the Sambisa forest.

Despite all the challenges she still managed to keep Jacob and another woman’s child safe – a heroic act that also helped her avoid being handed out as a wife of a Boko Haram fighter.

Hauwa also protected the children during the terrifying rescue mission when the Nigerian military stormed the camp.

“When the aircraft were above us we lay under the bushes to avoid being hit by bullets,” she says. 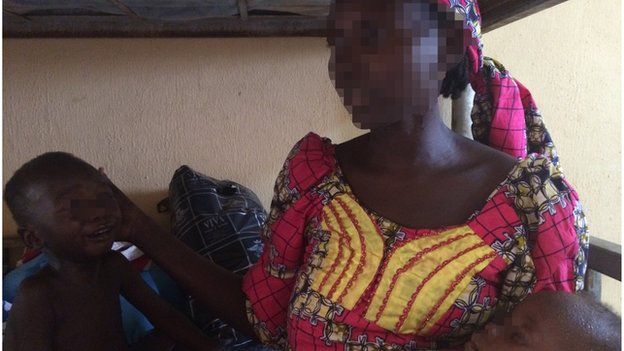 “The soldiers were shooting because they thought we were Boko Haram. Some of our women were hit, some died and others were wounded.”

Hearing that the Nigerian military had brought 275 of the rescued women and children to Yola, Margaret headed to the school “to find out if I was lucky”.

“When I found my son, Jacob, here, I was so happy it was as if I could fly,” Margaret said, her face suddenly lighting up.

Jacob needs a lot of help though. He is severely malnourished, as are more than 30 of the 200 children that were brought here. Help is available at the very basic clinic that has been set up at the school but some are disturbingly emaciated, with protruding ribs, and need emergency treatment.

Retired midwife Mary Galadima points to three children recovering on a mattress on the floor.

“That evening when they were brought here you would shed tears when you see them. These three here couldn’t walk – we had to carry them, they were so weak,” says

“When we give them food they start vomiting and they have diarrhoea because they stayed so long there in the bush,” says Mrs Galadima, who is now a village health worker in a government-funded programme to boost care in the most vulnerable parts of the country.

“Some also have eye problems because they became infected due to the harsh conditions they lived under, or the eyes were damaged when bombs exploded,” she says.

“If we know that there is a psychological problem we counsel them, and reassure them. That is all we are doing.”

The United Nations Population Fund, ICRC and volunteers are also helping with some counselling.

“Any human being put under such level of stress becomes overwhelmed and the normal coping mechanism, the in-built resilience is stretched beyond breaking point,” says one community leader from Borno State, who asked not to be named. After helping many former abductees he says some display clear signs ofStockholm syndrome.

“They are brainwashed and indoctrinated so I have met some women who begin to think what the group is doing is right,” he says.

Given the staggering level of suffering and heartbreak and the memories that haunt these women and children, the need for psychosocial support is overwhelming.

Boko Haram gunmen grabbed Safiya last December when she went to sell food in the market. She was several months pregnant and was taken with her husband.

Just hours into her ordeal she tasted the brutality of the jihadists.

“They killed my husband using a knife. Right in front of me they slit his throat,” she said.

From then on it was a battle for survival for both her and the unborn child, as she was moved from camp to camp – ending up in the harsh environment of the Sambisa forest.

“Every day they would come around and tell us we were infidels and we should convert and accept their religion,” she recalls.

“Some days they beat us. Sometimes they would starve us of food and even water.”

Safiya gave birth last week to a baby boy – just one day before the Nigerian military attacked to rescue them.

“We were very happy to see the soldiers because Boko Haram has said they would sell us and we never thought we would get out and live amongst people again.”

Safiya then tells me she has three other children aged nine, six and three.

“They were at home in Lassa when I was abducted at the market.”

She has not seen them since then and has no idea how they have fared as the insurgency has battered the towns and villages of the north-east.

The Red Cross says at least 60 of the children at the camp in Yola have been separated from their parents.

In recent months a local radio and TV station has helped reunite some relatives but so many families have been torn apart during this conflict there is a great need for more tracing of relatives to be done.

There are also many victims of sexual violence who need delicate counselling. Some young women and teenage girls held by Boko Haram have been forced to marry more than five men.

“Any time they go for an operation and one of the fighters is killed they will force the young woman to marry another one,” says the community leader from Borno State.

The survivors have extraordinary levels of resilience and had to be resourceful in order to get through the ordeal. Now they need huge amounts of long-term help as they try to heal.

All names of survivors have been changed. 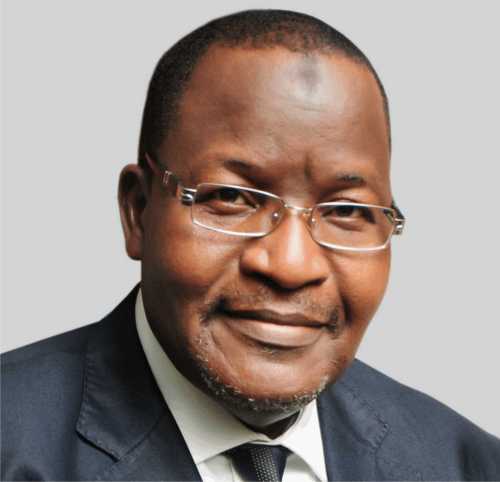