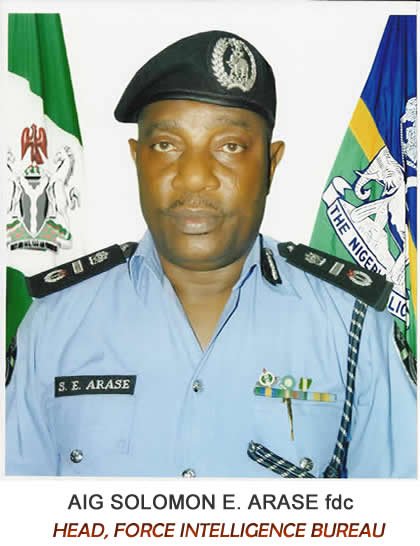 The IG directed that critical infrastructures like filling stations, major hotels, National and State Houses of Assembly, Eagle Square, Abuja, and other public places should be protected ahead of the May 29, 2015 inauguration of new administrations in the country.

Arase, in a statement yesterday by the Force Public Relations Officer, Emmanuel Ojukwu, explained that this was necessary to ward off possible plans by  insurgents to carry out violent and coordinated attacks on various  installations and public places during the hand-over ceremony.

The Police High Command urged members of the public to continue collaborating with officers and men of the Nigeria Police and other security agencies  to stamp out crimes, including terrorism.

The statement noted that the police had perfected strategies to prepare safe and secure grounds for the hitch-free inauguration of new governments nationwide.

Meanwhile, the Inspector General of Police has frowned at the use of police officers as domestic servants by some individuals.

The IGP noted that officers caught acting as servants would be arrested and punished.

He also announced that henceforth police personnel would only be attached to government officials.

“You are police officers of the Federal Republic of Nigeria and they must respect you as such.

“The uniform must be respected; anybody who wants to hire domestic help should not use our police men who are sent to protect them as domestic help.”

On the penalty for any officer caught acting as servant, Arase said: “I have directed the Commissioner of Police in charge of the airport that if they find any of you carrying boxes and rifle and dragging them all over the place, they should arrest you and you will be punished.”

The police chief also disclosed that the Force would audit arms and ammunition after the inauguration ceremony.

On the promotion of officers, the IGP also said officers due for promotion would embark on training immediately after the inauguration ceremony.

The IG also warned policemen against involvement in land disputes, stressing that such cases should be referred to the court of law or for Alternative Dispute Resolution.

He frowned at the participation of police officers in land issues, which he said bred corruption, noting that land dispute is not a criminal matter that should be settled by policemen unless there is a criminal dimension to the case.

The IG announced that 36,599 cops from the rank and file would be promoted soon, adding that the police management is also working hard to improve the welfare of its men.