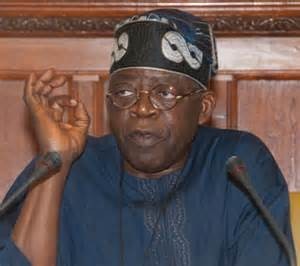 He ascribed it all to the party’s members’ hard.

Tinubu said Ambode’s victory was predicated on the radical transformation and well-articulated programmes he started 16 years ago, hinting that Lagos would start another race in its transformation drive given its alignment with the federal government.

The former Lagos governor hailed the Peoples Democratic Party (PDP) candidate, Mr Jimi Agbaje, for his statesmanship, describing him as a man of good values and character.

“We must bear in mind that a good democrat must accept result of a free and fair election.,” he said.

Tinubu said Agbaje showed good spirit by calling Ambode on telephone to congratulate him and for accepting his party’s loss in Saturday’s poll.

Tinubu said: “Our victory in Lagos is as a result of hard work I started 16 years ago. Constistent radical transformation of Lagos and well-articulated programmes, including education, infrastructure, urban renewal, innovative system of finance, knowledge-based economy and job creation in partnership with private sector. That resulted in leap development of Lagos.”

The APC leader said there would always be a winner in all contest, congratulating Ambode for his success.

Osun State Governor Rauf Aregbesola described the APC victory in Lagos as product of good leadership exhibited by the outgoing governor, saying the victory came with a task to meet people’s expectations in service delivery and good governance. He praised Ambode’s fighting spirit.

Lagos Commissioner for Environment Tunji Bello said the victory would take the state to another level of development.