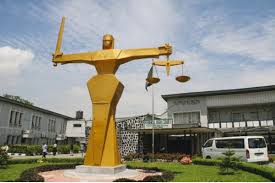 Rosolu was convicted on all the two counts charge of conspiracy and obtaining money by false pretences brought against her by the Economic and Financial Crimes Commission (EFCC).

Lawal-Akapo while sentencing Rosolu said: “The representation that she never collected $330,000 from the complainant is deceptive; the accused could not provide a strong alibi for her whereabouts when the fraud occurred.

“I find the accused guilty as charged.

“As a registrar of court, the accused should have been an image maker of the judiciary, but she acted in the contrary.

“She has to swallow her bitter pill.

“Both sentences are to run concurrently.”

Rosolu collapsed in the dock as soon as the judge gave the verdict, wailing in Yoruba language: “I do not know anything about the money, what is going to happen to my children.”

Earlier, Rosolu’s lawyer, Mr Bamidele Ogundele, in his allocutus pleaded with the court to temper justice with mercy: “My Lord, my client is a first-time offender without any criminal record and she has four children as dependants.

“My Lord, the society will not gain if her four children are abandoned without motherly care.

“She has been on suspension from the judiciary for over a year and she is retiring next year after 34 years of active service in the judiciary.”

Counsel to the EFCC, Mr E.E. Iheanacho, however, requested that Rosolu should receive the maximum sentence.

He said: “The crime for which the accused is being charged carries a mandatory sentence of 10 years imprisonment.

“In the circumstance, we will be urging the court to sentence her accordingly.”

The convict, who was a former registrar to Justice Joseph Oyewole, was tried for aiding Mr Fred Ajudua, a one-time Lagos socialite to defraud Bamaiyi at Kirikiri Maximum Prisons between November 2004 and June 2005.

The fraud was perpetrated when Ajudua and Bamaiyi were remanded in Kirikiri Prisons for different offences.

During Rosolu’s trial, experts from EFCC and Bamaiyi had testified that Rosolu came to the prison during the period to help Ajudua funnel the funds from Bamaiyi.

The anti-graft agency had alleged that Ajudua had made a false representation to Bamaiyi that the $330,000 was the professional fees for the law firm of Afe Babalola and Co. to facilitate Bamaiyi’s release from prison, a claim which the firm has since denied.

Two forensic experts from the EFCC had also testified during the trial that Rosolu had failed a polygraph test.

Rosolu, who testified during her trial, however, denied going to Kirikiri Maximum Prisons or knowing Ajudua and Bamaiyi. (NAN)