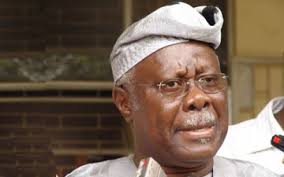 The National Secretary of the Peoples Democratic Party (PDP), Prof. Adewale Oladipo, has cautioned the leader of the PDP in Lagos State, Chief Bode George, for calling for the dissolution of the National Working Committee (NWC) of the party.

George had alongside some PDP leaders in the South-West, who met in Ado-Ekiti, demanded that the NWC be dissolved so that the party could be restructured.

George had said this was necessary due to the poor performance of the PDP at the polls.

However, Oladipo said it was unfortunate that some leaders were sowing seeds of discord in the party.

“My attention has been drawn to a communiqué purportedly issued by some PDP leaders in the South-West, calling on me, the National Secretary, Prof. Adewale Oladipo, and the National Auditor, Alhaji Adewole Adeyanju, to resign from the National Working Committee.

“However, a very careful examination of the inherent breaches in the procedures adopted in the convening of the meeting as well as the content and tone of its resolution showed an orchestration by a few individuals, bent on sowing a seed of discord within the PDP fold in the zone.

“This is evident in the fact that the said communiqué in no way reflected the views of majority of those who attended the meeting, neither did it tally with the opinion of the generality of our party members in the region.”

The PDP secretary said the meeting was a clear breach of protocol as those who attended it did not have the authority to discuss issues of the party’s presidential campaigns because the highest-ranking national officers of the party from the zone were excluded.

He said this was how the NWC was marginalised during the presidential campaigns, which also contributed to the party’s defeat.

Oladipo said members of the NWC were elected and they would remain in office until March 2016.

He argued that it was ironic that some of the leaders, who could not even win their polling units for the party, were the ones calling for the resignation of others.