Home Nigeria2015 I told Jonathan his regime had come to an end – TB... 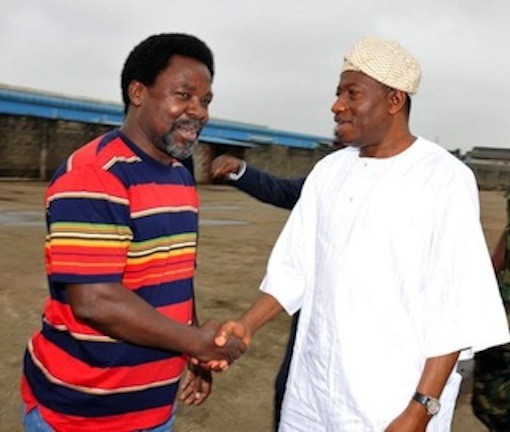 Nigeria’s controversial preacher and healer, Prophet T.B. Joshua, said on Sunday that he told President Goodluck Jonathan weeks before the 28 March presidential election that his regime had come to an end.

“This message should be delivered to your president, that whatever the outcome of this election, his regime has come to an end. He should accept to save the lives of millions,” Joshua said he told Jonathan through a presidential aide.

Joshua claimed he called Jonathan by phone and the president promptly sent a close aide to meet with him.

“It’s not a message I could say in the church because it would affect your vote,” Joshua claimed he told the president.

After the presidential aide had worshipped at The SCOAN during a Sunday service, Joshua said he met him and relayed the revelation that Jonathan’s regime had come to an end.

“Soft landing – that is the language I sent to the president,” Joshua said he told the aide to tell the president.

Joshua praised Jonathan’s tenure in office, saying that he had served his nation well despite the immense security challenges.

Joshua described Jonathan as a man who ‘has a heart for God’, and revealed that he spoke with the Nigerian president shortly before his historic concession call to General Buhari.

Joshua described Jonathan’s exit as ‘wonderful’, adding that it has cemented his legacy as a democratic champion.

“A man after God’s heart is a man with a wonderful exit. The beginner is not the owner but the finisher,” he told congregants.

He prayed that people from the ‘South-South’ region in Nigeria where President Jonathan hails from would understand that ‘their son has become a hero’.