Home Nigeria2015 We have just witnessed a bloodless revolution – Keyamo 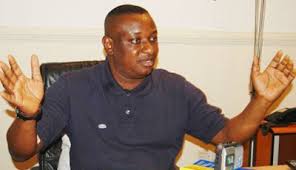 Renowned lawyer, social crusader and activist, Mr. Festus Keyamo was one of those who stuck his neck out for General Muhammadu Buhari. Throughout the campaign, he was unrelenting in his vocal support and mobilisation for Buhari.  In this interview, he talked about the victory and his suggestions on the fight against corruption amongst other issues.

Against the barrage of attacks poured on Buhari, how would you describe the victory ?

I think this victory was divinely ordained, because in the history of politics in Nigeria, no politician has been so battered and vilified by the opposite side  as General Muhammadu Buhari was. No ordinary politician could have survived those heavy pounding. But then General Buhari is not an ordinary politician. All over the country he has a cult following amongst the ordinary people, and it is that image that repelled those heavy defamatory artilleries that were directed at him.

His long-acknowledged integrity and incorruptibility saved him from those negative adverts at the end. In fact, for me personally, why I stuck out my neck for him was the incorruptible image of Buhari that my late boss, Chief Gani Fawehinmi created in my mind some twenty-three years ago when I started my practice with him. So it was difficult for that mental image I had of him to be rubbished overnight by some stupid documentaries by some desperate politicians. And that is why for a politician, image is everything and money is nothing. It is also a lesson to some of us that at a much younger age, it is better to develop a legacy of integrity and honesty. These are more enduring possessions than money.

How do you think Buhari can repair Nigeria?

I must confess that the challenges are huge because the damage that has been done by the PDP government at the national level in the last sixteen years has been enormous. There is no doubt that General Buhari has the requisite determination, courage and integrity to deal with the problems. But that is on the one hand. On the other hand, the people he picks to work with him must also key into his own vision and have equal determination and courage to deal with the problems. And yet there is one more angle: The level of the rot left behind by the retreating scavengers of our economy will only be known when Buhari finally has access to the books left behind. It is then we can know just how quickly the repair would take.

What critical sectors of the economy do you think need urgent attention?

The first thing he must develop is a template to address the issue of insecurity.

The economy in many parts of the North has collapsed as a result of insecurity. No economy can grow in the throes of insecurity. Then there is the power sector. Something urgent needs to be done, either by way of fine-tuning what is already on the ground or by a complete overhaul. The free fall of the Naira is also a cause for concern. Something has to be done to halt it immediately.  Issues surrounding the economy must be addressed quickly.

Then there is the problem of unemployment of our teeming youths across the country. And by this, I don’t mean letters of employment should start issuing to everybody immediately! What I mean is certain policies and programmes to revive small and medium scale industries in particular must be urgently developed to empower them to absorb many unemployed persons over a period of time. This is because the private sector is still the key to solving the problem of mass unemployment and not government.

Another problem is the almighty issue of corruption. The public must see a change in the approach of the new government in respect of the fight against corruption. The issue of backlog of pending corruption cases in our courts must be urgently addressed and the issue of cases swept under the carpet because of politics must also be addressed.

Talking about the fight against corruption, the major impediment has been the delay in dealing with corruption cases in court, what is the solution to this?

Well, if you remember, I sent a comprehensive proposal to the National Assembly some few years ago on how to address this problem but it was ignored. I wish they can take a look at it again. This is because the delays in the administration of criminal justice in Nigeria, especially corruption-related cases, have become a notorious fact. Well-meaning Nigerians have consistently raised alarm about this issue.

And it is a well-known fact that justice delayed is justice denied. Justice is denied to the generality of the people of Nigeria when those who are alleged to have committed heinous crimes against the State make nonsense of the law and delay their trials by clever tricks and continue to walk the streets and work their way into public offices to perpetrate more crimes whilst their criminal cases are pending in different courts. At the end of the day, the cases are lost because of the death of witnesses, loss of memory by witnesses, loss of exhibits, loss of interest and zeal by prosecutors and the aggrieved by effluxion of time, the compromise of witnesses by the accused, e.t.c.

In all criminal trials in Nigeria, especially the corruption-related cases, no matter how good the case of the prosecution is, the accused persons, through their lawyers, have now devised a common scheme or strategy to delay the trials and invariably thwart the whole legal process: they simply raise all manner of PRELIMINARY OBJECTIONS to either the Charge, or the proof of evidence, or the appearance of counsel or relating to jurisdiction of the court. They may also wait for the prosecution to lead evidence and then make a no-case submission.

Once they are overruled, (which happens in most cases as most of the Courts find those applications or submissions frivolous) the Accused persons would immediately file interlocutory appeals to higher courts and would always request the lower courts to stay trials pending the appeals. Once the trials are stayed by the lower courts, the appeals take a number of years to get to the Supreme Court before they are referred back to the courts of first instance to begin the proper trial. And take note that there is nothing stopping the defence lawyers from raising another fresh preliminary issue again that they may warrant them going on appeal again and asking for a stay of proceedings again. And this kind of game can go on and on.

Surely, this situation does not augur well for both the accused and the prosecution because even the accused person has a right to have his fate decided as quickly as possible. So the solution is to go back to that document I submitted to the National Assembly some three years ago.

How would you advice the President-Elect against the backdrop of many pitfalls of the Jonathan’s administration?

It is simple: The President-Elect must watch out for those hawks who are now swirling around him and who were never there before. They are called Any-Government-in-Power. These are people without principles, without integrity and without conscience. They will just come in and mess up his government for him. But I trust he has the experience to know how to weed off such people.

He should also not take for granted the present goodwill he has enjoyed across Nigeria. He must never take the people for granted. He must stick to his words and his campaign promises. He cannot solve all the problems overnight but the people must see some genuine efforts on his part and that of his team.

Do you believe in an ‘All-inclusive/Unity’ government as envisaged by the President-Elect?

Look, we are all Nigerians, whether we belong to the APC, PDP or any other political party. So, wherever the President-Elect can find capable hands, he should bring them on board.

When Buhari introduced War Against Indiscipline, WAI, he was a military Head of State. How can he inculcate or bring back discipline in our behavioral attitudes in a democratic setting? Nigeria is about the only country a bus driver stops on the centre of the road to pick passengers, Okada riders drive against traffic and people drop refuse on the streets, things that WAI stopped but are now common with us

What does this victory portend to Nigeria considering the fact that it is the first time opposition was winning, something many thought would not happen in our lifetime?

For once, the people have used their power to change a Federal Government through the ballot box. It has never happened before. No single shot was fired to achieve this change of government. It is what we call a bloodless revolution. It has lifted our spirits as citizens of this country and it has polished our democracy. The people have now scented blood with power of their PVCs and they will not look back again in using it effectively to change unpopular governments