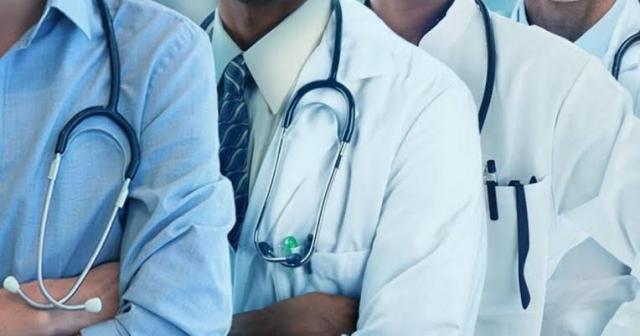 The state of healthcare in the country remains pathetic as most hospitals are mere consulting clinics, and in droves medical personnel are leaving for greener pastures abroad. This exodus of Nigerian doctors and other health care professionals abroad has become double jeopardy for health sector as costs of accessing drugs and treatments for ailments have skyrocketed.

In the midst of this, many Nigerians in need of medical treatment have resorted to patronizing herbal doctors, and itinerant local herbs vendors commonly called “Alagbo” in local parlance.

In this near collapse of health system and growing number of health professionals exiting the country, the federal government has shown much apathy, and appears unperturbed.

The Minister of Health, Dr. Osagie Ehanire,  recently, reportedly  said that there are enough medical doctors in the country and that the Federal Government would replace doctors who resign and leave for greener pastures

“As far as  I’m concerned, that statement attributed to the minister is most irresponsible, insensitive. In a saner clime, he should have resigned, Dr. Afolabi Ajayi, a medical doctor told  Business Hallmark.

“We have heard complaints of doctors who are now leaving the system, but there are actually enough doctors in the system because we are producing up to 2,000 or 3,000 doctors every year in the country and the number leaving is less than 1,000,” the News Agency of Nigeria quoted Ehanire as saying, in response to the growing exodus of doctors to other countries.

Professor Adalemo Jolugba, a psychiatrist at the University of Edinburgh told this medium that ” health professionals will continue to leave the country when we have this kind of government in place, which is not interested in development of health system but prefers to encourage its top officials to go for medical tourism. Can you imagine a minister,who is himself a medical doctor trivializing the exodus of health professionals?

The Ehanire scenario is not new. Recall that in 2019, the minister of Labour and Employment, Dr. Chris Ngige (also a medical doctor), had said just about the same thing.

“I am not worried about doctors leaving the country. We have a surplus. If you have a surplus, you export… It is my area, we have excess.” Ngige repeated this puerile jibe in 2021 during a meeting with states’ health commissioners.

The reality on ground is that  Nigeria is short of doctors. Only recently,  the   President of the Nigerian Association of Resident Doctors, Dare Ishaya, stated that six out of 10 resident doctors plan to leave the country.

The Nigerian Medical Association noted that “by the last analysis we had, we had between 20,000 and 25,000 doctors in Nigeria and this number is supposed to take care of 200 million people. So, we have a ratio of one doctor to between 4,000 and 5,000 patients. Meanwhile, the World Health Organisation recommended one doctor for 600 patients.”

It said unless drastic measures were deployed by governments to stem the tide of brain drain, the already bad national health indices may eventually spiral out of control thereby leaving Nigeria battered health wise.

In a communiqué issued at the end of its National Executive Council (NEC), last month, the NMA expressed disappointment over the failure of governments to address the “Push” factors propelling brain drain, which, it said, had led to the mass exodus of doctors and other health worker for greener pastures.

“The NEC reiterated that unless drastic measures were deployed by governments to stem the tide of brain drain, the already bad National Health indices may eventually spiral out of control thereby leaving Nigeria at the bottom rung among the comity of nations,” it said.

It also called for the conduct primary as well as translational research in management of infectious diseases, conduct regular training and re-training of health personnel and strengthen evidence based timely informed decision-making in order to detect, treat, contain, and control infectious diseases.”

An non governmental organization, Project PINK BLUE,  some months ago said  Nigeria would have a shortage of 50,120 doctors and 137,859 nurses by 2030 due to the mass emigration of health workers. It contended that  the density of physicians to a patient is four doctors per 10,000 patients, and 16.1 nurses and midwives per 10,000 patients.

According to the Nigeria Health Watch, about  80,000 doctors were registered with the Medical and Dental Council of Nigeria as of June 2021, out of which only about 35,000 are practising in the country and serving over 200 million people. The others practice overseas, with over 4,000 in the United States and 5,000 in the United Kingdom; some have moved to other professions.

These figures exclude  Nigerian doctors, who did not undergo medical training locally. Nigeria currently has the third highest number of foreign doctors working in the UK after India and Pakistan.

The National Primary Health Care Development Agency on its own reported that only 43 per cent of Nigerians have access to quality primary healthcare services. The OECD says that while India attained the UN-prescribed standard in 2018, Nigeria has a paltry 0.3 doctors to 1,000 citizens, compared to 1.8 for China, 2.6 for the UK, 2.8 for the US, 4.3 for Sweden, and 5.83 for Italy.

According to Dr. Bejide Awoshakin,  it is about the  finest professionals that are exiting the country  because candidates undergo rigorous qualifying tests by the recruiting foreign countries; only the best meet their criteria.

Business Hallmark could recall a scene last year when Saudi authorities directly came shopping for Nigerian doctors to revitalise their own healthcare system to which hundreds of doctors, including consultants, specialists, and other related experts with varying years of experience, responded.

But the government responded by sending operatives of the State Security Service to disperse the applicants at the Abuja venue.

Most professionals spoken to say unless the federal and state governments  take right measures to upgrade health care services and retain a skilled and motivated professional workforce, the country will continue to experience a brain drain.

According to document gleaned by Business Hallmark, nearly all the graduating undergraduates of the University of Hertfordshire in the medical department in 2022 are all Nigerians.

Sources familiar with the matter told this medium that none of them is planning to come back to Nigeria to practice as a result of hostile working environment and lack of equipment .

Presently,Nigeria  has only 24,000 licensed medical doctors available in the country, less than 10 per cent of the number needed to meet a WHO recommendation.

The President of the Nigerian Medical Association, Uche Rowland, stated while delivering a speech at a symposium to discuss ‘the brain drain in Nigeria’s health sector and its implications on health service delivery’ in Abuja recently averred  that  a large number of Nigerian doctors have emigrated to seek greener pastures in developed countries, noting that 5,600 of them have migrated to the United Kingdom (UK) in the last eight years.

According to him , Nigeria needs  23 doctors, nurses, and midwives per 10,000 population to deliver essential health services, as prescribed by the World Health Organisation (WHO).

Regrettably, he said only one doctor is available to treat 30,000 patients in some Southern states, while in the North, it is one doctor to 45,000 patients.

“In some rural areas, patients have to travel more than 30 kilometres from their abodes to get medical attention where available thus making access to healthcare a rarity,” he stated.

With the current figures of  24,000 doctors available, the current doctor-patient ratio is 1:9,083, a far cry from  WHO’s recommendation of one doctor to 600 patients.

With 218 million people to cater for, Nigeria requires at least 363,000 additional doctors to meet this target, according to experts.

It has always been shortage of doctors. According to data sourced by an online daily (not Business Hallmark) in 2019,  as of 2017, only 39,912 doctors were practising in Nigeria.

Same also revealed  that Nigeria produced 86,722 medical doctors from 1963 to 2019.  Rowland said the number of doctors produced by the country has increased to 93,000 with just about a quarter of them currently practicing in the country.

According to the president, the mass exodus of licensed medical doctors and other health professionals to more developed countries has brought significant disruptions to Nigeria’s health care system.

He said Nigerian medical doctors are seeking job opportunities in the U.S. and UK, while some are migrating to Middle Eastern countries like Saudi Arabia, Qatar, and Oman.