Documents, furniture and other valuables were destroyed by a fire outbreak at a storeroom in the House of Representatives section of the National Assembly Complex in Abuja on Thursday.

At about 6pm on Thursday, passers-by who noticed smoke coming out from a store on the second floor of the New Building, House of Reps Wing of the Complex, raised the alarm.

The wing houses the offices of the lawmakers, committee rooms, banks and other private businesses.

The office of the Speaker, Deputy Speaker and principal officers are on the fourth floor.

Firefighters from the Federal Fire Service, who have a permanent office on the premises, as well as security officials rushed to the office, which was under lock and key, shortly after.

The inferno was put out with fire extinguishers placed in strategic locations in the building, while fire engines were parked close to the site, with several firemen on standby in case the flame spread beyond the store and went out of control.

Rawlings Agada, the Director of Information, National Assembly, confirmed the fire in a statement issued on Thursday night.

The statement read, “There was a fire incident this evening in one of the janitors located on the 2nd Floor, Room 227 in the New Wing of the House of Representatives, suspected to have resulted from an electrical fault which was noticed by one of the staff members attached to the Clerk, House of Representatives, who promptly alerted the Federal Fire Service unit stationed in the National Assembly Complex.

“Accordingly, the fire have been put out with the assistance of staff members on duty who immediately broke into the affected office and effectively deployed stationed fire extinguishers on the floor before the arrival of the fire service officers.

“Consequently, the combined prompt efforts curtailed the fire to the affected office only, and power supply to the wing put off to enable a full assessment and investigations into the incident.

“It is expected that after due assessment by the Fire Service and the Estate and Works Directorate, normalcy in the New Wing housing all principal officers of the House of Representatives and honourable members’ offices will be restored immediately.

“(The) Management wishes to commend the prompt response/actions by the first responders particularly National Assembly staff (members) and the Fire Service unit in helping to curtain the fire outbreak.”

Agada also attached photos of the scene, which showed burnt documents, furniture and other items. 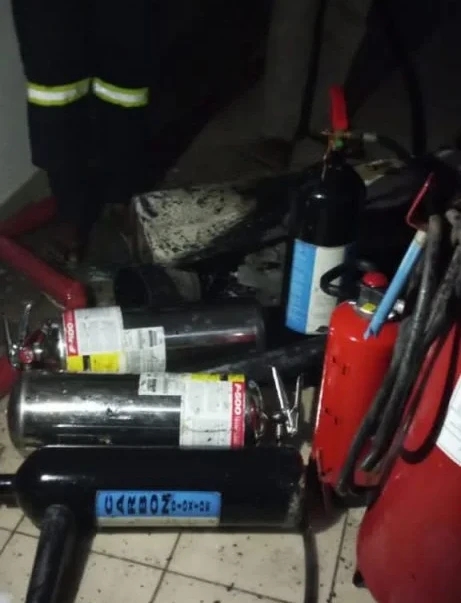