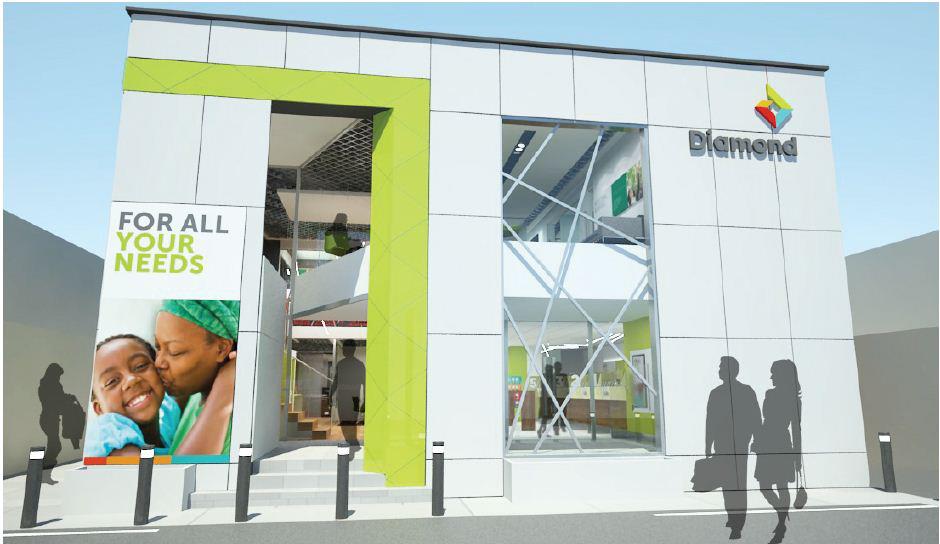 Overtime, Diamond Bank has acquired a reputation for digital banking excellence, but this has not been without early problems. The bank’s online platform has had a few snafus but it appears to be engaging in solid customer relationship repair.  Offline, the bank has had a similar number of challenges on meeting customer’s experiential requirements, especially across Lagos; customers are slowly readjusting to the banks refocused business model of electronic payment and settlement platforms and plug and play banking operations.

Diamond bank over the last few months has increased its emphasis on digital banking; its mobile banking application is about the most user-friendly in the industry. The success of these digital platforms as well as the upward review of amounts that can be withdrawn across the counter has largely reduced anxiety-soaked and packed banking halls. But just how much improvement has the bank achieved? Business Hallmark visited a few branches in Lagos to find out.

This branch is located at Aruna bus/stop, closer to the pedestrian bridge along Ikorodu expressway. Ikorodu, Lagos. It has its parking lot within a fenced gate which can take up to 15 cars on the average, there was a security officer who assisted customers to park and secure their cars. There branch has six Automated Teller Machines (ATMs) located in clearly visible locations; two of them were outside the fenced gate, four were within the bank premises having two on both side of the building. Three out of the six ATMs were dispensing cash at the time of our visit while it took on average five minutes to complete a transaction per machine. There were three smartly dressed security guards on duty working diligently to secure the premises and assist customers.

On entering the medium-sized banking hall, the first thing that caught our attention was the number of customers that gathered round the customer care representatives, on a rough count there were about 25 or more customers who surrounded the two customer care officers who were seated attending to each complaint or enquiry, interestingly the officers took about five minutes each to attend to respective customers. There were also five Tellers at the counter attending to the 15 customers on the queue, taking each teller about ten minutes to attend to each customer.

The banking hall wasn’t too comfortable as it was a bit over-crowded. It had a water dispenser with no disposable cups; it equally had a clean toilet for both male and female.

This branch situated along Oshodi-Apapa Expressway, Oshodi , Lagos, has a big parking lot that can take up to 20 cars but has a number of ‘No parking’ signboards littered across the premises with about four to five cars parked. The branch has seven ATMs, two of them were seen outside the bank’s fenced gate and five others were in the ATM gallery in the bank premises by the right hand side. Three of the ATMs were dispensing cash as at the time we visited, taking customers about five minutes to complete each transactions. There were five private security officers on duty at the branch, two security personnel manned the security post, one was in charge of the ATMs, while another security officer was in charge of the entrance and the last one was in the banking hall.

The branch had good ambience and was clean. It had a water dispenser filled with water and disposable cups. It had a clean toilet for both Male and Female.

This branch located on Joel Ogunaike Street, opposite Dominos supermarket, operates within an unfenced building that has good space where customers can park their vehicles. The ATM gallery which is detached from the bank has four machines, which were all dispensing cash. Customers walked to the ATMs and made withdrawal without problems. The bank’s premise was well secured by private security personnel; two oversaw the building, while one ushered customers in and out of the banking hall.

The ambience of the banking hall is a model of what every customer craves for. Every section of the bank was fancifully arranged. There was another ATM within the large hall. Four Tellers manned the counter; they were courteous and quick to attend to customers. In less than 20 minutes, four customers were attended to at the counter. The customer care section of the branch had three staff attending to the customers. One of them who attended to us while we were there was quite friendly. In less than 10 minutes he provided answers to our enquiries.

The branch had a functioning water dispenser which was filled with water and disposable cups. It had a decent toilet open to customers in the banking hall.

This branch is situated along Ogunnusi Road, Ojodu Berger. The parking lot which was outside the iron bar gate could take 10 cars and had one security personnel who was in charge of the parking lot. The branch has three ATM machines in the bank premise, but only two of the three were dispensing cash and it took customers about five minutes to make withdrawals. There were 12 customers on queue at the time of the visit.

The medium-sized banking hall had four Tellers at the counter attending to a thin crowd on queue taking each Teller about eight minutes to complete a transaction. There were 15 customers on the queue waiting for their turn to be attended to. The two customer care representatives had their section in a small room behind the banking hall, which was filled with customers who needed to speak with an officer.

The branch has a neat environment. There was a water dispenser in the banking hall which was filled with water and stocked with cups. The branches toilet was rather small but clean.