Nigeria’s minister of youth sports, Mr. Sunday Dare, has called on Nigerians to take issues of climate change seriously to tackle food insecurity and imbalances in the planet’s ecosystem.

He noted that climate change represents a threat to food security in the country.

Dare who spoke at the 2022 Environment Symposium held in Abuja on Thursday, said Nigeria is not immune from the adverse effects of climate change, which according to him is caused majorly by human activities, is unbalancing the weather of the earth; sustainability of its ecosystem; future of humankind, and the stability of the global economy.

“Nigeria is not immune from the adverse effects of climate change. We are experiencing increases in temperature; variable rainfall; rise in sea level and flooding; drought and desertification; land degradation; more frequent extreme weather events which are affecting fresh water resources and leading to loss of biodiversity,” he said.

“Economic activities such as agriculture, fishery, and forestry are also taking big hits in different locations in the country.”

Mr. Dare who was represented by Ann Kemi Areola, his aide on youth and ICT, said the federal government has introduced several initiatives including the “Green Stimulus Programme” to advance knowledge in renewable energy and smart agriculture.

Climate change is increasingly threatening Nigeria’s ecosystem, with increasing desertification in the north, erosion in the east, ocean surge in places like Lagos, among others.

A Nigerian born, British activist, Emeka Obasi Jnr, is leading an awareness campaign in this regard, through his NGO, Our Tomorrow. 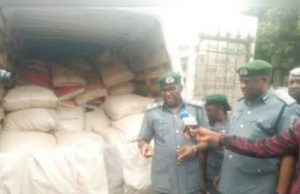