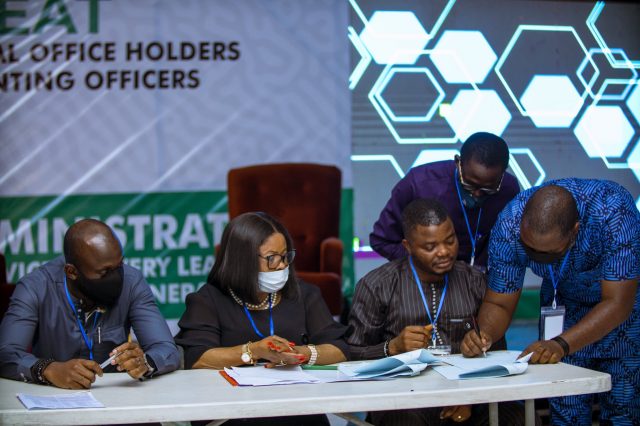 BudgIT, a civic-tech organisation, has signed a Memorandum of Understanding with the Ondo State Government to improve and support fiscal transparency and responsibility in the state. BudgIT did this under its subnational transparency and institutional partnership project across all 36 states.

The signing which took place at the Retreat for Political Office Holders and Accounting Officers, had the Ondo State Governor, Arakurin Olurotimi Akeredolu and his Deputy Governor, Mr Lucky Ayedatiwa, in attendance, a statement signed by Iyanu Fatoba Communications Associate, said.

The same time, the State Secretary-General, Princess Oludunni Odu and the State’s Attorney General, signed the MoU on behalf of the Ondo State Government, in the presence of Arakunrin Rotimi Akeredolu.

During the MoU signing, the Ondo State’s Secretary to the State Government (SSG), Princess Catherine Oludunni Odu, noted that the Ondo State Government, through the leadership of the Governor, is committed to ensuring fiscal transparency and accountability in its public finance and related affairs.

BudgIT’s Country Director, Mr Gabriel Okeowo, reiterated BudgIT’s commitment to supporting the Ondo State Government through its fiscal transparency process. With the involvement of the state government’s technical team, BudgIT will design an Open State portal for the State government. This portal will serve as a repository for the pre-budget statements, executive budget proposals, enacted budgets, audit reports, implementation reports, financial statements and other public documents.

Likewise, BudgIT pledged its support to further strengthen the Ondo state government’s work on fiscal reforms and the observed gaps for the administration’s success and its “REDEEMED” agenda of improved service delivery, which will ultimately improve revenue generation.

“An open state is a win for both the government and the citizens, as it projects the state positively for investment and development support opportunities. In contrast, citizens enjoy improved service delivery through public participation and constant engagement with the government”. added Tolutope Agunloye, BudgIT’s Open Government and Institutional Partnership Lead,

BudgIT urges other state governments in Nigeria to subscribe to this initiative as it will effectively raise local and foreign investment channels for economic growth, development, and sustenance.