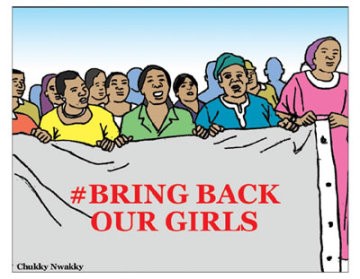 The #BringBackourGirls has appointed no fewer than 219 pupils as ambassadors for the 219 girls abducted by the Boko Haram insurgents last year.

The group made this known in Abuja while marking the first anniversary of the abduction of the pupils of the Government Secondary School, Chibok, Borno State.

The ambassadors, all female primary and secondary school pupils, who marched to the headquarters of the Federal Ministry of Education on Tuesday, however, did not have access to the premises.

But a member of the #BringBackourGirls group, Mrs. Aisha Yesufu, told our correspondent that the ambassadors were still able to present their letters to officials of the ministry.

She said, “We had written to them that we were coming. The children felt bad, especially when the gate was locked but they were still able to present their letters. They wrote the letters in their own words and the content was so powerful.”

Though the girls were not up to 219, Yesufu said the decision to choose the ambassadors arose from the need to groom the next generation of articulate leaders in the country.

“We put the information on our website and the ambassadors downloaded and filled the consent forms. They only had to be female and between the ages of 10 and 18. Our generation believes that adults are always right, but these children know that what is wrong is wrong and they need to speak up.

“It is not going to be a one-off thing. We are grooming leaders for the next generation. The ambassadors knew about the Chibok girls and we did not have to tell them anything. They came with their own passion,’’ she added.

Yesufu noted that the decision to choose ambassadors had made more Nigerians appreciate the pains of the abductions of the Chibok girls.