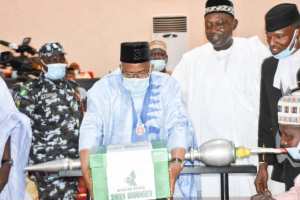 The Bauchi state governor, Bala Mohammed, on Tuesday, presented a budget of N213 billion for the 2021 fiscal year to the Bauchi State House of Assembly for scrutiny.

The proposal which is N46 billion higher than the previous year was christened the ‘Budget of Consolidation’.

Mohammed sai the budget was predicated on the benchmark oil price, exchange rate of naira to US dollars and a robust and efficient system of internally generated revenue collection in the state.

He added that the budget is to be financed by recurrent revenue estimates of N180 billion, and capital receipts of N105 billion, while lamenting that a number of challenges were faced in the implementation of 2020 budget which led to the downward review of the budget to N129 billion due to dwindling revenue as a result of the Covid-19 pandemic, which stagnated the world economy.

“Despite these challenges, we were able to record moderate success in the implementation of the 2020 budget. Out of the budgeted revenue, including excess crude of 61 billion, only the sum of 34 billion was realised as at 30th September 2020,” he said.

In his address, the Speaker Bauchi House of Assembly, Rt. Hon. Suleiman Abubakar said that the House will do justice to the proposed 2021 budget as provided by the law, adding that the budget will undergo second reading immediately and will commit to the Appropriation Committee for further legislative action