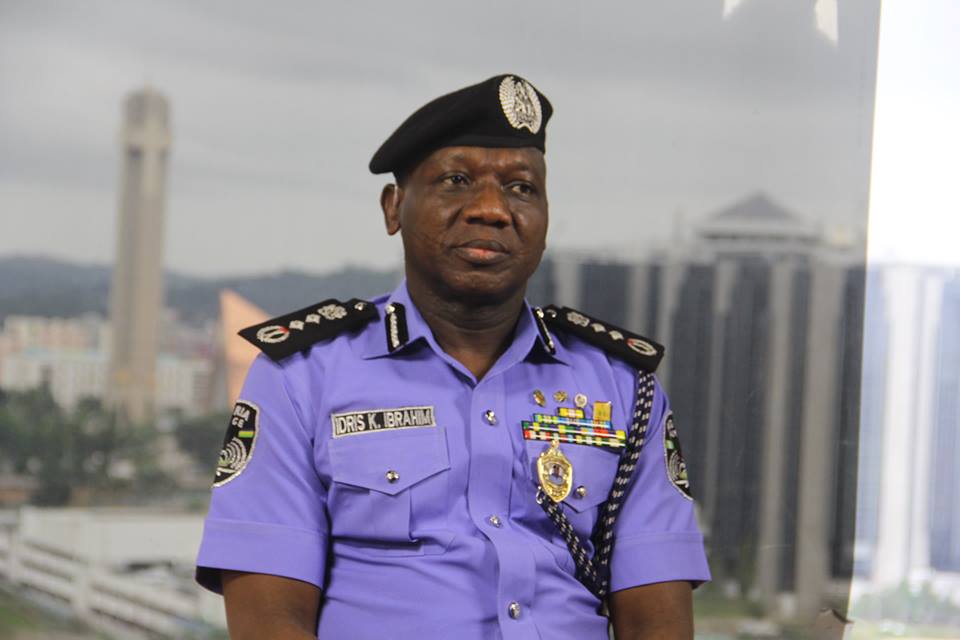 The DIGs were not the only casualties. Also affected were close to 30 AIGs who were senior in rank to the new IGP.

The reason proffered for such far reaching decision with huge implications for the police force was that Mr. Idris came first in an “integrity check” conducted by the presidency in the quest to name a new IG. Although some have argued that the appointment may have had ethnic and religious colouration.

The investigators, it was said, found out that the new IG was living in a three bedroom mortgage flat in Abuja while the only other house he own was a modest personal house in his village in Niger state… a pointer to his supposedly being a man of integrity.

The new IG promised soon after he took over from his predecessor, Arase that the police under him would be guided by internationally accepted standards. He assured that the force would no longer tolerate the handling of complaints by citizens with levity, and tackle internal corruption as a yardstick for addressing crime within the country.

A little over a year down the line however, the would be Mr. Integrity is the subject of embarrassing allegations of corruption and gross abuse of office. It is a scandal that has not only dragged any claims of integrity on his part to the mud, but has also called to question, President Muhammadu Buhari-led All Progressive Congress (APC) government’s much touted but largely scandalized anti corruption effort.

It all started in August when Senator Hamman Isah Misau who serves as Chairman, Senate Committee on Navy alleged that the IGP collects in the neighbourhood of N120 billion annually as bill for special security services.

The senator who represents Bauchi Central at the National Assembly noted that the “unreasonably exorbitant special security services” was being rendered to corporate bodies, such as oil firms, and highly placed individuals on yearly basis across the country and condemned what he called “series of fraudulent practices in the running of the Nigerian Police.”

He accused the IGP of collecting millions in bribes from police commissioners for favourable posting and literally turning the Nigerian Police Force into a Nupe confederacy. His allegations were weighty, but even so, nothing was done by way of investigations by the administration.

The police force responded by declaring the senator who served in the force until his retirement in 2010 a deserter, claiming that he absconded from duty on September 24, 2010 and asked the Senate Ethics and Privileges Committee to prevail on the senator to make himself available to face the Force’s disciplinary committee for acts of serious misconduct and unprofessional doings, and subsequently declared him wanted.

The Force Public Relations Officer, CSP Jimoh Moshood, who raised the allegations, assured that, “as a deserter from the Nigerian Police, the force will definitely take appropriate action in this circumstance against Senator Isah Hamman Misau.”

He explained further that the circumstance of a deserter had to do with the Police Act and Regulations, the Criminal and Penal Codes, which stipulate that a deserter was a suspected criminal under the law and called on, “all other security agencies in the country” to assist the Nigeria Police Force in this regard.

Following the allegations however, the senator provided a letter to journalists, dated March 5, 2014, containing the approval of his retirement from the force, but the police said the letter was “forged.”

He was subsequently invited by the Police Service Commission (PSC), a commission headed by another former IG, Mike Okiro to answer to the allegations raised by the force. But he firmly declined the invitation, accusing the commission of encouraging corruption in the Force while insisting that the Police cannot be a judge in its own case.

Nonetheless, the PSC proceeded with its investigations and would later conclude that the senator followed due process in retiring from the police.

The PSC spokesperson, Mr. Ikechukwu Ani who made the clarification to an online media platform, TheCable, said the senator’s retirement letter was based on a recommendation from the police headquarters.

“Yes, they called me and I confirmed that the commission issued the letter dated 5th march 2014 to take effect from 1st December 2010. It was based on a recommendation from force headquarters,” Ani said.

“So his retirement followed due process.  He however did not appear before the committee.  But the committee has confirmed that the commission issued the letter.”

The allegation of desertion had been false; it was thus evident that the IGP may have raised it to divert attention from his own case. But Misau was not deterred.

A fortnight ago, he further accused the police chief of corruption, abuse of office and sexual harassment of female police officers.

While speaking at the floor of the Senate, Mr. Misau accused Mr. Idris of recently impregnating two female police officers and arranging for a secret wedding with one in Kaduna. He also accused Mr. Idris of awarding special promotions to female officers and ‘his boys’ at the expense of merit, an allegation that has been criticised for being more of a personal attack.

“The IG is openly having two relationships with policewomen who he gave special promotions. One of them is Amina and one of them is DSP Asta which the IG on 15th of last month got married to. Under police act and regulation, you cannot marry a serving woman police unless that woman retires,” Misau said

Mr. Misau equally alleged that the IGP is using his office to undermine the power and function of other high ranking officers, while also alleging that the IGP diverted funds meant to purchase eight armoured carriers.

“Mr. President, there is illegal diversion of funds by the IGP. Under the 2016 appropriation act, there is the provision where the IGP is supposed to purchase armoured carriers. Instead of purchasing the 8 armoured patrol carriers to help the President in fighting insurgency in the North East, he diverted the fund to something else.”

“The IGP has decided that all posting of mobile combatants be done in his office meanwhile there is Commissioner of Police in charge of mobile force and that of the Special Protection Unit. All postings which are supposed to be done by these commissioners are done in the IGP’s office.

“Under the police act and regulations, every investigation into the force is supposed to be done under the office of the DIG Investigations and Intelligence but now, the IGP has created so many units under him putting junior police officers as heads thereby undermining the statutory office of the DIGs.”

In response to the accusation of marrying their daughter secretly, Mrs Asta’s family few days ago, faulted Misau and explained that their daughter got married to the IGP publicly at the Sultan Bello Mosque, Kaduna.

Mr. Nasiru Baba Saleh, a member of the family, told Daily Trust that Misau lied against their daughter and that he must prove the allegations in court.

Defining what constitutes public or secret wedding would surely divide opinions, but until the senator raised the allegation, not many Nigerians were aware that the Mr. Idris had taken a wife as it was hardly reported in the media. This shouldn’t have been so going by his status as IGP.

Indeed, most indicators point to the fact that the senator may be right in some of his allegations. Around police circles, a number of officers spoken to admitted that the IGP is running the force much like a dictator.

The PSC revealed as much on Sunday last week when it admitted that although Mr. Idris sometimes disregarded its directives, it has no power to discipline him.

The commission which stated this in a statement by Mr Ani, said while it would not compromise its constitutional mandate to appoint, promote and discipline officers of the Nigeria Police Force, its powers does not extend to the IGP.

“The Commission also wishes to state that its powers to do this does not cover the office of the Inspector General of Police.

“The Powers of the Commission are stated in paragraph 30, Part 1 of the third Schedule of the 1999 Constitution,” he said.

The allegations are weighty, and going by informal interactions with members of the police force, it would appear there are elements of truth in them.

Yet many have continued to wonder why the government and the Economic and Financial Crimes Commission (EFCC) have decided to ignore them, and have instead, only decided to accuse the senator of raising false allegations even without investigating same.

Last week, the government dragged Misau before a Federal High Court, Abuja, for allegedly making “injurious falsehood” against Mr Idris, the Chairman of PSC, Okiro, and the Nigeria Police in various newspaper publications.

In the seven-count charge filed last week by the office of the Attorney General of the Federation, the government accused Misau of submitting false documents to the Independent National Electoral Commission (INEC) in 2011 and 2015 and false declaration of age which it said, were punishable under Section 1(2)(C) of the Miscellaneous Offences Act Cap 17 Laws of the Federation of Nigeria, 2004 and punishable under the same section of the Act.

It is a charge that has not gone down well with a lot of Nigerians who described it as an attempt to divert attention from the issues raised by the senator.

Reacting to the development, Anthony Chidi, an Abuja based legal practitioner pointed out that the allegations raised by the senator were grave and should be properly investigated.

“It is ridiculous that the government is taking the senator to court over frivolous allegations instead of investigating the issues raised,” he said.

“I think there should be a thorough investigation. If the senator lied, he should be made to face the music, but if the IGP is guilty, he should also receive punishment.”

Hassan toes the same line. “We must ensure that justice is manifestedly seen to be done, let the IGP prefer charges against Senator Misau. If found culpable for any offence, he should be punished. At the same time, if the IGP err in law of police Act by marrying his colleague (which to me is a private matter) he should face the law.”

Interestingly, while the Senate had resolved to probe the allegations raised by Misau, and had insisted it would go ahead not minding the decision of the government to drag the senator to court, the IGP last week filed a suit at a Federal High Court sitting in the the FCT asking it to stop Senate President, Bukola Saraki and the Senate from proceeding with the probe.

In the suit filed on Thursday, the IGP is seeking an order restraining the committee to sit or invite him until the determination of the suit.

In the suit, he said Misau “rained a personal attack” on him by saying he was romantically involved with policewomen.

A move that triggered backlash on social media.

“The guilty is afraid,” wrote facebook user, Etim Ohobo. “The Senate must proceed to probe IGP”

Another user, Owodieyene Livinus alleged that the IGP is seeking to stop the probe because according to him, he is corrupt.

“You are corrupt,” he wrote. “If this is how other Nigerians are protected for stealing, Nigeria will not survive.”