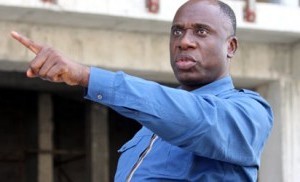 Rivers State Governor Hon. Chibuike Rotimi Amaechi has accused First Lady, Patience Jonathan of fuelling crisis in the state ahead of tomorrow’s Governorship and House of Assembly elections in the state. The governor alleged that the renewed upsurge in militancy in parts of the state was as a result of the quest of Mrs. Jonathan’s resolve to control the affairs of the state and further mastermind the rigging of the elections in favour of Peoples Democratic Party (PDP). Governor Amaechi stated this on Thursday at an interactive session with stakeholders at the Obi Wali International Conference centre, Port Harcourt, where he highlighted his administration’s readiness for Saturday’s elections. Amaechi, assured the stakeholders of adequate protection of their lives and property following his recent meeting with the security operatives who have agreed to be fair to all during the polls. His words, “What the security operatives and the state government agreed at the meeting was to design a mechanism on how to stop the attempt by militants and PDP thugs to snatch and hijack INEC materials during the Saturday polls. “Voters and party agents should not allow this hoodlums take over the election. They cannot kill all of us. We are aware that militants and hired PDP thugs who claim to be loyalists to Mrs. Jonathan are planning mayhem. But, the Police and the military have assured the state government they will deploy more troops to guarantee safety and protection of lives and property.” The governor also expressed dismay over the unlawful activities of militants and hired political thugs by the PDP in the Ogba-Egbema-Ndoni Local Government Area of the state, and ordered the immediate ban of motorcyclists popularly called (Okada ) in and around the locality until the Saturday elections are concluded. He called on traditional rulers, opinion leaders and party faithful to assist government to sensitise their people at the grassroots on the need for the people to come out en masse and exercise their franchise. ”I call on traditional rulers, politicians and opinion leaders to take this singular message to their people to come out enmass and vote candidates of their choice. What happened during the March 28 Presidential Poll will not occur any longer”, Amaechi concluded.