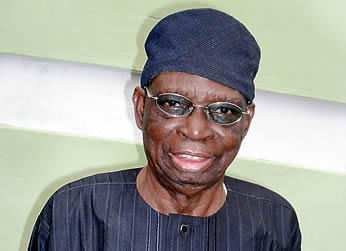 National Chairman of the Alliance for Democracy, Mojisoluwa Akinfenwa, has directed the party supporters in Lagos and other parts of the country to vote for candidates of the Peoples Democratic Party.

Akinfenwa said the AD members should ignore a statement credited to former presidential candidate of the party, Rafiu Salau, directing party supporters to vote for the All Progressives Congress governorship candidate in Lagos State, Akinwumi Ambode, and other APC candidates for the state assembly seats.

The AD chairman, who addressed the media at his Ibadan home on Thursday, said Salau had been expelled from the party and therefore lacked the political status of an AD member to make pronouncement on behalf of the party.

Akinfenwa said, “This is to bring it to the public the stand of AD against the false declaration made by one Mr. Rufus Salau. It is good to reiterate that earlier before his call for support for APC, he had been expelled from the party. He was until January 28, 2015 the National Secretary of AD. At the National Executive Committee meeting of the party in Abuja on January 28, which Salau attended, he was told to withdraw from the presidential race as AD candidate.

“Reason for this decision was that the primary that produced him was not attended by any of the 36 state party chairmen and 22 members of the NEC because the party never approved or was aware of such primary. With effect from March 10, 2015, Salau was finally expelled from AD owing to his excesses such as engaging in anti-party activities and issuing of press releases which I, as the chairman, and the NEC were not privy to.”

While stating reasons for supporting President Goodluck Jonathan in the last election, Akinfenwa said that the party would back Jimi Agbaje in the governorship race in Lagos State.

“I therefore direct all members of our party nationwide to vote massively for AD candidates on Saturday. Where the party has no candidate, the NEC of the party has directed the state chapters to vote for PDP candidates that had approached and solicited for AD support, for example, in Lagos State where PDP had requested for our support for its candidate, Agbaje.