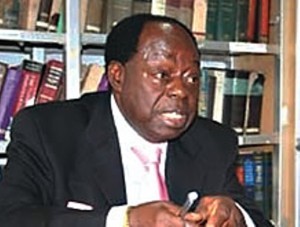 A representative of the firm, who is also a managing partner, Adebayo Adenipekun (SAN), made this disclosure while testifying at the ongoing trial of a court registrar, Oluronke Rosolu.

The EFCC had specifically alleged that Rosulu aided Ajudua to defraud Bamaiyi of the sum of $8.4 million under the false pretence that it was a part payment for the professional fees charged by Chief Afe Babalola (SAN) to handle his case, while both of them were being remanded at Kirikiri Maximum Prison between November 2004 and June 2005.

Adenipekun, who was a prosecution witness in the case, said “Ajudua did not brief our firm to represent Bamaiyi at any time. That is not correct. We did not receive any legal fee from Ajudua in respect of the General.”

The lawyer also while being led in evidence by the EFCC counsel, Seidu Atteh, said he was the chamber’s head of administration during the period of the said transaction and that there is no record of it.

He stated, “We were never briefed to represent Bamaiyi and we did not receive any money from Ajudua,” Adenipekun maintained.

Following his brief testimony, the court adjourned the matter till May 13 for continuation of trial.

It would be recalled that Bamaiyi had alleged that Rosulu, a former registrar to Justice Joseph Oyewole, collected $330,000 from him on behalf of Ajudua.

Bamaiyi said the money was given to her as part payment of the legal fees requested by Afe Babalola Chambers to represent him in his murder charge before Justice Oyewole.