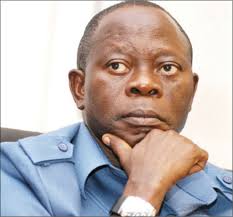 Governor Adams Oshiomhole of Edo State says Year 2016 presents the people of the state with the opportunity to elect a credible candidate who will build on the successes recorded by the present government in the past seven years.

In his New Year message signed by his Chief Press Secretary, Mr Peter Okhiria, Comrade Oshiomhole said “as a government, we are proud of the remarkable achievements we recorded in the past seven years and we remain thankful to the people for the trust and confidence reposed in us to conduct the affairs of the state.
“As we enter into another election year in the state, I enjoin our people to work assiduously to ensure the success of the elections and ensure that only the candidate who has the interest of the state and the people at heart emerges to ensure the continuation of the remarkable successes recorded by this administration on schools, roads, hospitals, water and energy, security and indeed the provision of a conducive environment which has attracted multi-billion naira investments in different parts of the state.
“Of course, in the election year, there will be tension, there will be acrimony, there will be rumours and counter rumours, but I assure you that we will remain focused on the job and in all we do, we will put the interest of our state above any other consideration.
“On my part, I assure that this administration will finish strong and continue to work hard till its last day. To this end, all projects started by this administration will be followed up with all due diligence and vigour to ensure their timely completion. We will deliver more schools with red roofs in each of the eighteen Local Government Areas of the state; complete ongoing road projects across the state; complete, equip and put the 200-bed Central Hospital to use and even initiate new projects which we find critical to the development of the state.
“I salute the good people of the state: our royal fathers, the professional groups, civil servants, student bodies, civil society groups, market women and the ordinary people in the streets for standing by this administration in the outgoing year and in the past seven years.
“Also, I commend the Christian and Muslim communities and people of other faith in the state for their peaceful and brotherly coexistence.
“I specially recognize the contributions and efforts of the security agencies in the maintenance of peace and security in the state in the past year.
“I appeal to the people of the state to continue to inculcate the virtues of love, tolerance and togetherness which have bonded us together as a people and have made us the envy of all in the country.
“As I wish you a happy and bountiful New Year, I pray that the peace and grace of God abide with you forever.”