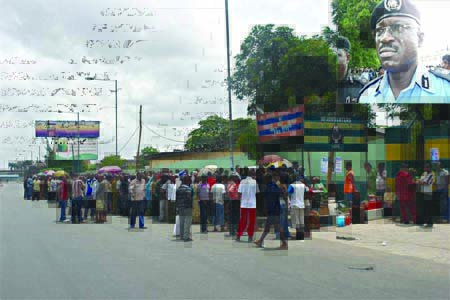 ABUJA — Barely 24 hours to the governorship and houses of assembly elections, the two major parties, All Progressives Congress, APC, and the Peoples Democratic Party, PDP, have engaged in a war of words, trading accusations over alleged plans to disrupt and rig the elections.

The Inspector-General of Police, Mr Suleiman Abba, however assured on the preparedness of the police to ensure hitch-free elections even as he approved the immediate redeployment of senior police officers to the states.

The APC in a statement by its National Publicity Secretaty, Alhaji Lai Mohammed, alerted the security agencies to alleged moves being made Governor Olusegun Mimiko of Ondo State to disrupt tomorrow’s elections in the South-West by instigating widespread violence.

The party said the governor has already met with the thugs, who have been trained specifically for the purpose of disrupting the elections, at Akure and Iro in Akure South Local Government Area, giving the group of thugs at each location N350 million for their devilish assignments.

According to the party, “the strategy is to deploy these thugs to various parts of the South-West with the express instruction to violently disrupt elections through sporadic shootings and stealing of ballot boxes.

“This is the governor’s answer to the massive defeat he received from the electorate in the region in general and in Ondo State in particular during the March 28 presidential elections.

“The fear of the thugs have already sent many APC leaders, who have been targeted for attack, scampering for safety. While some have gone underground, others have relocated either from Ondo State or from the region entirely.

“These developments do not augur well for a free, fair and peaceful elections, hence the need for security agents to face the challenge posed by the hired thugs squarely.”

APC said the thugs had already started unleashing violence, killing one person at a rally in Igbara-Oke in Ifedore Local Government Area of the state on Wednesday

“It is important to alert the sponsors of terror and electoral malfeasance that whether or not they have immunity from prosecution, ultimately they will be made to face the full wrath of the law to account for their unbridled penchant for violence,” the party warned.

It called on all APC members and supporters to be vigilant and to document all cases of brigandage and rigging across the region, while also alerting local and international observers to pay close attention to the conduct of the elections in the region, as well as in other flash points like Rivers State, on Saturday.

Responding to APC’s allegations, the national leadership of the PDP said the APC was already jittery of what it described as imminent defeat.

The PDP also dismissed as frivolous, APC’s allegation of plots to disrupt the elections in the South-West, adding that the APC was merely crying wolf for fear of defeat at the polls.

In a statement signed, yesterday, by PDP National Publicity Secretary, Mr Olisa Metuh, the PDP stressed that the false alert by the APC was part of its plot to heighten tension in the zone and scare away voters from exercising their franchise, having realised that the wind of change blowing in the region will sweep them away tomorrow.

Metuh said: “This latest false alert is in continuation of APC’s desperation which made it drag the revered traditional institution to rain death threats on people ostensibly to sway the voters.”

According to PDP, such antics would not save the APC in the zone. It, therefore, urged its members and supporters in the region, especially in Lagos, not to be deterred but completely disregard APC’s gimmicks.

Only those with PVCs will vote —INEC

This was even as it reassigned the Resident Electoral Commissioner in Kogi State, Alhaji Hussaini Halilu Pai, to supervise the conduct of tomorrow’s elections in Kano State, following the tragic demise of the state REC, Alhaji Mukaila Abdullahi, last weekend.

In a statement yesterday from Mr Kayode Idowu, Chief Press Secretary to INEC chairman, Prof. Attahiru Jega, the commission explained that its warning was against the backdrop of alleged statement from a particular state governor from one of the North-Central states directing voters to go out to vote with Temporary Voters Cards, TVCs, even if they do not have the PVCs.

He said: “A particular state governor in the North Central geo-political zone is reported to have assured voters in the state that they could go out to vote on election day with Temporary Voter Cards, TVCs, if they do not have the PVCs, and that INEC will not be allowed to insist on the use of SCRs for voter accreditation.

“The commission reaffirms that only voters with genuine PVCs should come out to the polling units on the election day, saying that guidelines issued on the use of SCRs for the April 11 elections will be strictly applied.

“Any action infringing these guidelines will be an electoral offence, and security agents will be on hand to apprehend offenders.”

INEC said it was in possession of “reports that some political leaders are asking members of the public to disregard its stated resolve to use PVCs and Smart Card Readers, SCRs, for the April 11, 2015 governorship and state Assembly elections.

“Members of the public are strongly advised to disregard false assurances that contradict the regulations INEC has outlined for the governorship and state Assembly elections.

“The commission commends voters for their peaceful conduct and exemplary resilience, even in the face of minor challenges during the Presidential and National Assembly elections on March 28, 2015.

“It, however, considers it unfortunate that some leaders would misguide the public and thereby prepare ground for needless disruptions to the polling process on April 11.

“INEC hereby warns that any obstruction to the processes it has put in place for the elections by any person, no matter how highly placed, will constitute an electoral offence punishable in law,”it insisted.

The Inspector-General of Police, Mr Suleiman Abba, has ordered restriction of vehicular movement in the 36 states from 8 a.m. to 5p.m.

A statement issued by the Force Public Relations Officer, Mr Emmanuel Ojukwu, yesterday, in Abuja explained that the measure was to ensure safety and security during the polls.

“There is no restriction of vehicular movement in the Federal Capital Territory as there is no election taking place there on the said date,” the statement said.

It added that the restriction excluded “vehicles on essential duty such as fire service, ambulances and vehicles used by INEC and law enforcement/security agencies.”

The statement assured that adequate security logistics and manpower had been strategically deployed to achieve conducive atmosphere for the polls.

It said that policemen on election duty had been properly briefed on their roles as stipulated in the Electoral Act.