War and peace are conceived in the mind first as a flickering idea, so are failure and success, says Russian author, Leo Tolstoy.

The story and the narrative around the annual Zik Prize in Leadership intertwine with the wonderful trajectory of the life of the brain behind the Prize which has become iconic.

Only the falconer can speak to and understand the language of the falcon, thus for many who have followed the fairytale career of Prince Emeka Obasi in journalism, political writing and social commentary will be forced into a comparison with the great Mathew Anorld, the 19th century public intellectual who disrupted the intellectual landscape of the 19th century Britain with his acerbic commentary on the foibles of the era.

Obasi, an intellectual enigma and daring spirit, who is also the publisher of Business Hallmark, conceived of the idea of Zik Prize and previously had initiated the idea and coming into fruition of the Awolowo Foundation when he was under 30.

A roving restless enquirer, Obasi navigated the length and breadth of the country consulting with the powerful and notable Nigerians such as Professor Jubril Aminu, Generals Ibrahim Babangida and Domkat Bali and others , and surprisingly because of the keen intellect seen in the young idealist, they bought into them ,and today both the Awolowo Foundation and the Zik Prize have become a reference point, though, he may no longer be directly involved in the running of the former, the fact remains it was his baby.

Awarded by the Public Policy Research and Analysis Centre, PPRAC, it was a testament of the receptivity that until recently Professor Jubril Aminu was for many years the Chairman of the Advisory Board of PPRAC, and in that capacity is succeeded by no less eminent figure in person of Professor Pat Utomi, unarguably, one the best technocrats and public intellectuals around in today’s Nigeria.

The primary aim and objective of the Zik Prize, as further enunciated by Professor Aminu is “To encourage and nurture leadership on the African Continent and in the Diaspora. The year 2021 Zik Prize Award is set to follow this noble tradition of recognizing service excellence.”

Over the years, it has recognized Nigerians in diverse fields who have added value to the country, deepened collective discourse towards a better Nigeria. This year’s award was indeed, one of the outstanding highlights in the canon of Zik Prize for sheer number of eminent Nigerian awardees and the large turnouts.

The roll-call was intimidating but from the Emirs of Kano and Lafia to the group managing director of NNPC to NIMASA’s director general among other eminent Nigerians.

As a recognition of his impactful leadership, a Peoples’ Democratic Party, PDP, presidential aspirant and former President of the Senate, Senator Anyim Pius Anyim, was on November 7 in Lagos bestowed the prestigious 2020 Zik Prize in Political Leadership .

Anyim who was the former Secretary to the Government of the Federation, SGF, was earlier announced along with other winners of the Year 2020 Zik Prize in Leadership Award by Chairman of the Selection Committee, Prof. Pat Utomi, on behalf of the members of the Board of Public Policy Research and Analysis Centre, PRAC.

He was honoured in recognition of his exemplary leadership qualities shown when he occupied the offices of the Senate President and the SGF, where he left indelible legacies. Meanwhile, he (Anyim) won the 2020 Zik Prize in Political Leadership category along with the Minister of State for Health, Senator Olorunimbe Mamora.

Governors of Lagos and Nasarawa States, Babajide Sanwo-Olu and Abdullahi Sule, were honoured with Year 2020 Zik Prize in ‘Good Governance’.

The Group Managing Director/CEO of NNPC Ltd, Mallam Mele Kyari has been commended for transforming the fortunes of the NNPC from a position of loss-making into a profit- making venture.

The Public Policy Research & Analysis Centre (PPRAC) gave this commendation while conferring its ‘2020 Zik Prize for Public Service Leadership’ on the GMD, at the Eko Hotel, Lagos, November 7.

Speaking on behalf of the Centre, Chief Mac Wabara said Mallam Kyari was recognised following his distinguished leadership role and sterling achievements in the NNPC, which are all evident through the various reforms he instituted at the Corporation through transparency and accountability.

He said: “Mele Kyari continues to seamlessly transform the operations of NNPC, including deepening domestic gas utilisation, rehabilitation of the nation’s refineries and public disclosure of NNPC accounts, the first in NNPC’s 44 years of existence.”

He added that Kyari’s greatest achievement, no doubt, was turning around the fortunes of the NNPC, from a loss of position, into a profit-making entity.

He further explained that Mallam Kyari also consistently played a huge role in the enactment of the Petroleum Industry Act (PIA), stressing that with the coming of the legislation, the NNPC is now well-positioned to operate efficiently, like its global peers.

Responding, Mallam Kyari said in the last two years, the NNPC has automated its processes and systems; reduced its costs of operations and focused on delivering value to Nigerians, in line with his Management vision of Transparency, Accountability & Performance Excellence (TAPE).

He added that the enactment of the Petroleum Industry Act (PIA) has placed huge responsibility on the NNPC to do things differently and be much more accountable to its shareholders, the over 200 million Nigerians.

He said the Zik Leadership award will spur him and his Management team to work harder towards becoming an International National Oil Company that is at par with its global peers.

This year’s event had Chief John Nwodo as Chairman, while the Emir of Kano, Alhaji Aminu Ade Bayero, was the Royal Guest of Honour.

Recall that in 2019, the President of the Senate Ahmad Lawan was awarded the 2019 Zik Prize in Political Leadership. Lawan’s Chief of Staff, Dr. Babagana Muhammad-Aji was at the impressive ceremony in Lagos to receive the award on behalf of the Senate President.

The organisers of the award, the Public Policy Research and Analysis Centre(PPRAC) said Lawan’s consideration was in recognition of his “long-standing dynamic service to the Nigerian state” and his “undying commitment to the entrenchment of democratic ideals in the Nigerian polity.” 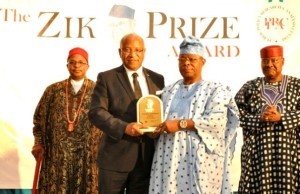 In his acceptance speech which was delivered by Dr. Muhammad-Aji, Lawan expressed his pleasure and delight to have been recognized for the prestigious award.

The Senate President said the award would be dedicated to his ‘Distinguished colleagues in the Senate’, who had remarkably risen above partisan differences to form a bond that is committed to the progress and development of Nigeria.

The 2017 edition, like many others was also a great event.

Governor Aminu Bello Masari of Katsina State in 2017 joined other great leaders in Africa to receive the prestigious 2017 Zik Award for Good Governance at a grand reception held at Civic Centre Towers, Lagos.

The governor was described by the organizers as a “dogged fighter” and honoured for his people oriented reforms, massive grassroots and infrastructural development projects across the state.

Also in the good governance award category is Governor Nyesom Wike of Rivers State who earned the award owing to his contribution to infrastructural development in Rivers State.

The 2017 event, which was chaired by the Emir of Kano, Muhammadu Sanusi II, was attended by statesmen, technocrats and captains of industries across the country.

He said, “The primary aim is to encourage and nurture leadership on the African Continent and in the Diaspora. The year 2017 Zik Prize Award is set to follow this noble tradition of recognizing service excellence.”

The PPRAC Chairman disclosed that the award given to Governor Masari was in recognition of the giant strides of his administration in bringing about good governance in the state, with more emphasis on rural dwellers.

Governor Aminu Masari, who spoke on behalf of the awardees, noted that the award would go a long way in enhancing the harmonious relationship among political gladiators in the country. 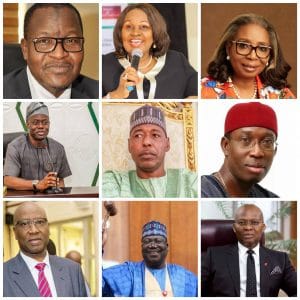 Since its inception in 1995, each year has always proved unique and colourful.