Home Politics You have no right to interfere with PDP affairs in my state... 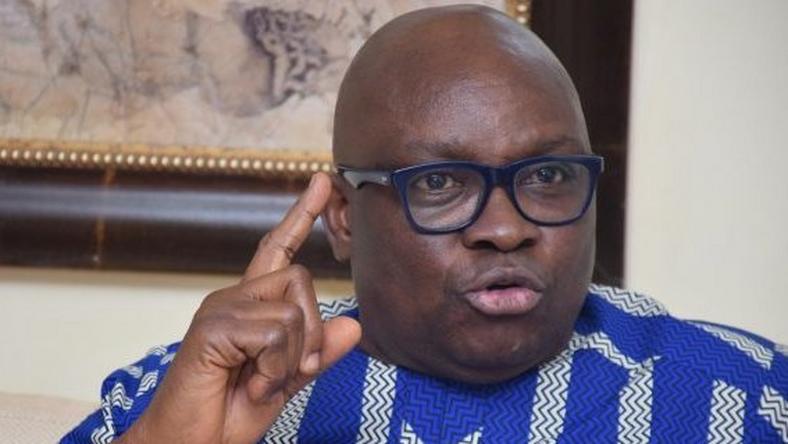 Fayose was particularly irked by Makinde’s alleged interference the politics of the Southwest People’s Democratic Party (PDP), particularly as it concerns who becomes the next chairman of the party in the zone.

The former Ekiti governor spoke in Abeokuta, Ogun state when he led the national delegates of PDP, including the chairmen of the party in Osun, Ekiti, Lagos to the Ogun state capital to plege their support for a chairmanship aspirant for the zone, Dr. Eddy Olafeso

Fayose while speaking to newsmen warned the Oyo governor against tampering with the leadership of PDP in Southwest states.

He explained that the Oyo governor had no right to interfere in the local politics being played in each Southwest state despite being a zonal leader of the party.

“Governor Makinde as a zonal leader of the PDP should allow every state to be governened by its local leaders,”he said, stressing that he was ready to fight anyone that wants to take over the structure of the party in Ekiti from him.

“There has been a reasonable cold war on who and who becomes the executive of the zone. Governor Makinde has demanded that the zonal executive be sacked and a caretaker be fostered on the zone which the party did. But, since the caretaker committee came into being, he has not allowed them to function because he produced the chairman.

“Beyond that, the fact that he is a sitting governor does not say he should go to another man’s state. Nobody should come to my state; if you come to my state, I will face you squarely.”

Fayose said, however, that Makinde remains his brother and he would continue to protect him, but emphasized that he doesn’t have a right to manage other people’s states.

“I will continue to respect him because he is my brother, I love him so much and I was part of his emergence,” he said.

“Every state has its own leaders, but by recognition and respect, whosoever is the governor is a leader.

When I was the governor, I was the leader, but nobody can come out to say I interfered in what happened in their states” he added.

“There is a level of respect a leader must have to continue to be a leader, so, the moment you cross that line, we are going to look into your eyes.

Speaking, the PDP chieftain in Ogun state, Ladi Adebutu pledged that 85 per cent of the party structure in the state would support Olafeso’s candidacy, noting that his own structure which he claimed had the majority in Ogun state would make sure Olafeso emerged as the Southwest chairman of PDP.

Similarly, in their separate responses, the chairmen of PDP in Southwest which include Engr Deji Doherty (Lagos); Sikirullahi Ogundele (Ogun); Sunday Olatunde Akanfe (Osun) and Bisi Kolawole (Ekiti) endorsed the candidature of Olafeso.