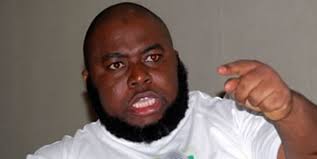 According to the ex-freedom fighter, if the incoming president ventures into sending anyone to prison, the ‘Moses’ in him will rise and the whole nation will boil.

Dokubo who had earlier warned that if President Goodluck Jonathan loses his second term bid, blood would flow in the nation warned the ex-general that he has no power to jail anyone even as the Commander-In-Chief of the Armed Forces of the Federal Republic of Nigeria.

“Mohammed Kabir Ibrahim, your Buhari does not have the power to send anybody to prison. Get that into your piggy skull and nobody is afraid of him.

“We are waiting for him. Following the example of GEJ does not make us cowards. If he Buhari wants to be a Pharaoh, then he will find a Moses in me.”

It would be recalled that Buhari, at several of his campaign rallies, had revealed that he planned  to probe corrupt public officials and send them to prison if elected president.

The president-elect revealed that any public official who betrayed the trust of Nigerians and illegally enriched himself under his administration would be made to face the full wrath of the law.