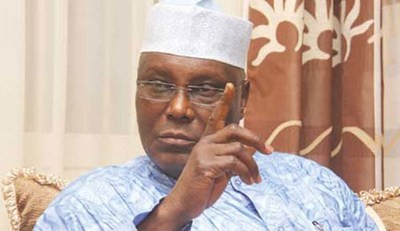 Atiku argued that this accounted for the failure of the government to achieve any appreciative result in the sector.

Atiku, who was the chairman at the 36th Kaduna International Trade Fair’s Seminar, organised by the Kaduna Chamber of Commerce, Industry, Mines and Agriculture, said these while responding to questions from the audience.

The seminar has as its theme ‘Making it in Nigeria: Promoting domestic production for national sustainable economic development’. Atiku argued that under the Obasanjo administration, there was no minister in charge of petroleum for the eight years he was vice president, saying he was handicapped to respond to a question on why private investors were unable to obtain licences to build refineries.

He, however, noted that in the eight years when Obasanjo, as President, doubled as the Minister of Petroleum Resources, he(Atiku) was not able to make any appreciable input.

According to him, the oil and gas sector was solely handled by his principal. He added that at that time, nobody knew what was happening in that sector.

“During our administration, there was no transparency and accountability in the oil and gas industry.

There was a time we were

handed a Ghana-Must-Go memo on the oil and gas and the President asked for our input and I refused to support it,” he added.

Atiku explained that the Obasanjo government took the wrong approach in tackling the power challenges and ended up spending several billions of dollars on the sector without appreciable results.

He said the President Goodluck Jonathan-led government took the same step, which accounted for the current epileptic power supply in the country today.