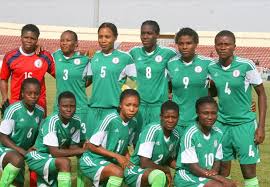 No doubt the senior female national team, the Super Falcons and the Dream team VI have really boxed themselves in to very tight corners. With Rio de Janeiro 2016 Olympics in sight, it is looking very dicey for our male and female football teams.

The Super Falcons were held to a 1-1 draw by another powerful female football playing nation in Africa, Equatorial Guinea; our ladies now face an uphill task in the return leg that will be played in Bata on August 1.

Recently, the reality of Equatorial Guinea as an emerging force in African female football was seen. What they did was to come to Nigeria, understudy our football, send players to come play for club sides in this country and even nationalized many of our ladies. Today that move is beginning to yield positive results as it was a Nigerian Chinasa Okoro that equalized for Equatorial Guinea against her own country of origin

Meanwhile, Super Falcons stand-in coach, Christopher Danjuma has given a barrage of excuses why her ladies couldn’t get pass their opponents. First; he cited the unavailability of key players like BBC world player of the year and Liverpool striker Asisat Osuola and Minsk FC of Belarusia defender, Onome Ebi as reasons for the teams failure. Also he claimed the ladies were also psychologically down as a result of the death of the Super Falcons media officer, Gracious Akujobi.

Another factor largely responsible for falcons’ shambolic performance was complacency. Our ladies had always believed that they are untouchables. The fact that they had never lost or drawn at home made them overconfident; Coach Christopher Danjuma had boasted prior to the match that Falcons were number 1 and would easily override any African opposition.

Despite the poor result churned out by Super Falcons on Saturday in Abuja, a day after the nation’s Olympic team – Dream Team VI failed to console football loving Nigerians in Port Harcourt. They wobbled and fumbled and only struggled to manage to squeeze out a 2-1 result against a Congolese team tutored by Claude Leroy.

Going forward, a 1 goal deficit can be easily cancelled especially when the disadvantaged team will be playing the return leg at home. It has been established in football that in any two legged affairs, an away goal counts as two, and the Congolese will count themselves very lucky to have scored one against Nigeria.

In 2008, Samson Siasia was the coach of the Dream Team, he couldn’t qualify Nigeria for Algiers 2007 All African games but promised to qualify for Beijing 2008. Siasia didn’t only qualify but got to the final and lost to Lionel Messi and Angel Di Maria-inspired Argentina.

The truth is that both the Super Falcons and Dream Team VI have really done themselves great disservice by not churning out convincing results in the first leg. They are definitely walking the tight rope, and also on the verge of missing out from the 2016 Olympics in Brazil. For the two teams to qualify they must first of all avoid defeat. For the boys they can settle for any type of draw. A goalless or score draw will see them through while the ladies must go for an outright win although a 2-2 draw and above will see them grab the Olympics qualification ticket.

To savage the situation and looming embarrassment, the two chief coaches Danjuma and Samson should identify the grey areas, try as much as possible to fix them, eject fresh and quality players who will add bite to the teams and ensure all loopholes are blocked.

The failure of both teams to qualify for the last Olympics is still very fresh in the memories of many football fans. This time around all hands must be on deck to ensure that Equatorial Guinea and Congo are taken to the cleaners. Nigeria’s male and female teams must feature in Rio de Janeiro 2016.