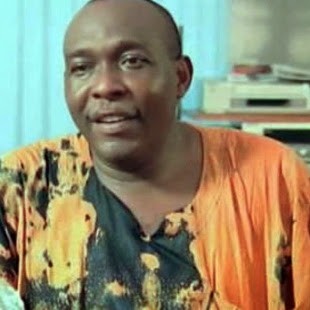 After many years of pains and complaints of neglect, especially over his colleagues’s refusal to help him out, stroke-struck veteran actor, Peter Bunor finally lost the battle last Friday when he gave up the ghost.

According to his son, Peter Bunor Jnr, also an actor, who broke the sad news, via his BB, ”my father, teacher, friend and confidant passed in the early hours of today, Friday May 1 2015.”

A star of many box office movies, Peter was one of the pioneer players that helped to transform the industry into what it is today but he preferred to live a friendly and quiet life.

He died after battling with the killer ailment for years. Peter who sought for financial assistance from his umbrella union, the Actors Guild of Nigeria and colleagues and even went to the extent of accusing them of lack of care, in one of his complaints, stated that ”my colleagues, even the ones I mentored in the industry, have abandoned me since I fell ill.”

He lamented further; ”since this thing happened, no single actor has called me to ask about my condition. It is a shame on their part. Would they say they don’t know that I am sick? I had a stroke and that was the end of it.”

Mum has however been the word since his death last Friday as no one, both from the AGN or on individual basis, wants to speak on the circumstances that led to his eventual death. ”It’s unfortunate that he lost the battle, may his soul rest in peace,” was more of the responses offered by some of them.

Although a few of its troubled members received financial support that enabled them to receive enough medical attention even outside the shores of the country, the AGN has not been able to assist anybody in recent times.

Only recently, Muna Ibekwe also lost the battle to a renal failure which raised a lot of dust over the way the guild handled it.

And as Peter Bunor dies, another veteran actor and producer, Prince James Uche, is said to be lying unconsciously in the hospital with two of his kidneys gone!

According to an SOS message from actor Torino Ojukwu, ”we’re about to lose Prince James Uche, a great actor. He has two kidney failures and needs a transplant . He is lying critically in the hospital unconscious. Please let’s cry out for help and save him,,”

Up till this moment, there’s not been any positive response from any quarter.