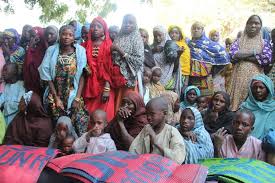 The United Nations launched an appeal yesterday for $174 million in what it called “life-saving aid” for almost 200,000 Nigerians who have fled the country due to brutal attacks by Boko Haram jihadists.

The insurgents, who are seeking to create an Islamic state in the country’s predominantly Muslim north, have killed up to 15,000 people since 2009, according to the UN.

“Displaced people in north-eastern Nigeria and across borders are in a very dramatic situation,” Liz Ahua, west Africa representative for the UNHCR, the organisation’s refugee agency, said.

“They continue to fear for their lives, and are at this point unable to return to their homes.”

Some 192,000 people have fled over Nigeria’s borders into Cameroon, Chad and Niger seeking refuge from relentless violence, according to the UNHCR.

A further 1.2 million have been displaced within Nigeria as a direct result of the bloodshed, the agency said at the launch of the Nigeria Inter-Agency Regional Refugee Response Plan.

Staff and volunteers in 23 aid organisations and UN agencies say they are struggling to provide shelter, food, education and sanitation for the refugees.

Robert Piper, the UN’s humanitarian coordinator for the Sahel region, said more than 7,300 civilians had been killed since the start of 2014 in the three states of the northeast, including 1,000 already this year.

“Gross violations of human rights, including sexual violence and child trafficking, are frequently reported. Education and health infrastructure has been decimated.

“The majority of victims have found makeshift shelters in schools, with their neighbours and relatives. They have lost everything — their homes, their livelihoods, their families.”

The UNHCR showed a video of refugees in Minawao camp, Cameroon, featuring a boy called Ibrahim, whose village in Nigeria’s Borno state was over-run by dozens of heavily-armed Boko Haram fighters.