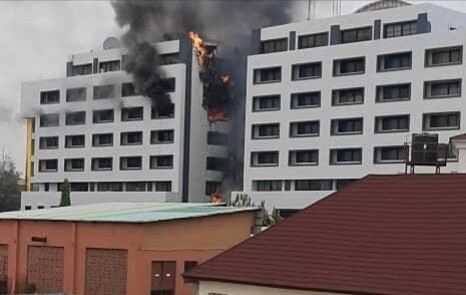 The Ohanaeze Ndigbo Youth Council Worldwide (OYC) has accused those it described as political musketeers of attempting to destroy the database of the Accountant General of the Federation’s office so as to conceal billions of naira stolen from the federal government palliative fund for Coronavirus.

The group alleged that the fire outbreak at the Treasury Office was an attempt to disrupt the forensic investigations into 2trillon palliative money shared among some government officials.

Recall that the office complex of the Accountant-General of the Federation, also known as Treasury House, was on Wednesday gutted by fire in suspicious circumstances.

Ohanaeze youth called on President Muhammadu Buhari and the National Assembly to investigate the inferno.

Ohanaeze’s position was contained in a statement signed by its president-general, Mazi Okechukwu Isiguzoro, on Wednesday.

The statement read in part: “OYC supports a forensic investigation into the remote causes of the fire Incident that happened in the Treasury House on Wednesday April 8th 2020.

“This happened immediately the National Assembly initiated a probe on the perceived fraudulent activities associated with disbursement of 2 trillion Naira of Coronavirus Palliative Care.

“OYC condemns vehemently the attempt by political musketeers to destroy the database of the Accountant General of the Federation’s office.

“Nigerians are fully aware that something fishy happened in the disbursement of the coronavirus pandemic palliative money.

“The National Assembly should not be cowed to stop the probe of this monumental fraudulent activity of those involved in the process; no sacred cow should be spared in the investigation.”