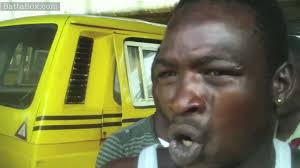 In Lagos, they rule the road with iron-fisted rigidity, not ready to brook any opposition, in most cases they are married to more than one wife, some go as far as three or four, aside a host of concubines. Watch them satiate their hunger in eateries, and you will be amazed at the cost expended : Take a look: four huge chunk of meat, assorted fish, ponmo strewn and peppered with Egusi soup with bottles of Origin or any other brand to ‘wash’ the food down. Welcome to the world of ‘Babalaye, the Chief Tout at the motor park.

For Lagosians life is not complete without one funny and atimes brutal encounter with these touts as they have managed to shroud their daredevilry and daily assault on the psyche of peace-loving commuters under an omnibus umbrella: Members of Road Transport Workers Association.From Berger to Okokomaiko, to Apapa, there’s hardly any place you venture that you will not meet them and their creative language inventiveness. There’s hardly any slang or cliche that gains currency that did not emanate from them, and for them language is a combination of verbal and non verbal communication. Their speech is always dramatic, gestural and aggressive to complement the menace in their looks.

And if you think you can outwit them in a game of chasing women, you will be out for the shock of your life when one of them has an event or when they are about to unwind at a club or joint after a ”hard’; day job harassing motorists and scaring daylight out of commuters. In most cases, they are responsible for a hike in motor fare.

For this reporter, the subculture of motor park touting has long been fascinating. And so Agbado junction busstop became a first point of what was akin to sociological inquiry into the strange world of Lagos Agbero.

”Muwalori ere, ma gorae—-bring it (money) quick, don’t be a fool”, Kola , one of the Agberos shouted at a bus which was moving out of the park slowly on its way to Agege. The dishevelled looking Kola with a stained nauseating set of teeth was menace-looking. The driver of the bus was trying to play game but Kola outwitted him and yanked N500 off his hand, and handed back N300 change. For about ten minutes, this reporter watched a kailedoscopic repeat of this as different buses left the park and some arrived from different destinations. These Agberos were in multitudes.

”Bros–(meaning brother), i want to talk to you”, said this reporter to Kola, the tall and lanky tout.

”Daboyiri, oripemowalenuise”—-(Are you mad, can’t you see that am at work), he howled wolfishly . After much patience and persuasion, Kola, 42, who hails from Iseyin in Oyo State told this reporter his story in Yoruba language with interjections in broken English. He came to Lagos about two decades ago with just one set of clothes, having ran away from his home town, after he could not cope in primary school. His parents wanted him to learn carpentry but he turned it down after seeing the affluence displayed by Afeez, his friend who left for Lagos a year earlier. He slept under bridge in Ojota for six months, and as he said , he survived by being ”smart” after Jide, one of the big boys he met under Ojota bridge tutored him on the skills necessary to survive. When prodedfurther , he disclosed that ‘smartness’ consists in stealing bags and doing odd jobs. According to him life was hard, and he passed through a lot of difficult times before he finally found his grooves in Agbado. ”Many people have the impression that we are not human beings , they look at us as if we are a failure but i can tell you we are better than many educated people who work in offices’, he said. He disclosed that on the average, he makes between N5000 to N7000 daily, and contributes N2000 daily into a common pool, for six months after which he’s entitled to a loan not less than N700,000.

”I have two houses, and a bus and two tricycle, and my children attend good school. If you are in doubt, follow me to my house in Ijoko. It may surprise you that am a community leader”. Pointing to a senior colleague, he said, ”That man has Murano jeep, three beautiful wives who are Alaja–meaning they had been to Mecca, and three big houses”

When he finished the morning run, he took this reporter to a near by joint, where he was feted and celebrated as if he were a politicians, to the amazement of this reporter, beautiful ladies fawned on him. He ended up spending N5000 on drinks and pepper soup for three girls, this reporter and two other Agbero that went with him.

Many of the Agbero are successful in their ways, but their lifestyle is something that constitutes a menace to the society. Apart from the money they make which they spend in brothels patronising prostitutes, marrying more wives and for the sensible ones erecting structures, every other thing about them is odious to innocent commuters.

Motor park touts in Lagos operate through a vicious network, which is a daily nightmare to commercial bus drivers and law enforcement agents, who are careful not to meddle in their affairs.

Agbero, a sobriquet for ragamuffins, who find solace in the motor parks, doing odd jobs, is synonymous with all social vices one can imagine. They live in Terror Land, where aggression is the order of the day. The common factor with the inhabitants of this land is delinquency.

At every bus-stop, you would recognise them, some by their green and white uniform, some in mufti, while others wear reflectors. They always collect ‘dues and loading fees’ around the clock, for different unions, including operators of motorcycles, tricycles and various sizes of commercial vehicles, with the National Union of Road Transport Workers (NURTW) as the umbrella body.

An elderly danfo driver, Nkemjika Boniface, operating from a popular terminus in Alimosho Local Government Area of Lagos, gave a graphic detail of the operations of the agbero. According to him, his driver was beaten, with his tee-shirt torn over a N600 ‘booking’ fee, which Boniface had to pay after the fracas. Why are they so aggressive?

“It is not about them, it is the chairman that protects them, so they must show loyalty to him at all cost”, Boniface said. “Even if you arrest the agbero, before you treat the wound they inflicted on you, they are back to their duty post at the bus stop, the NURTW unit chairman ensures they are freed. That is how the system works”, he said.

Daily Times investigation revealed that the agberos run a much organised mafia-style system, with each unit chairman reigning supreme in his domain; he receives daily returns, through the week.

Recently, our correspondent witnessed another scene that mirrors the fear of agbero in Lagos.

While loading his bus at the Idimu garage, Taju, the driver, had hoped to avoid paying the garage fee, as he did not see the collector all the while he was loading.

But as he hopped in and pulled out of the garage, with an unusual speed, the agbero appeared from nowhere and, with the swiftness of a monkey, sprang at the door of the bus, as the driver accelerated. Mocking the driver, he said, “So you think you will sneak away just like that, eh? Oya, Owo da?”

Taju, with persuasion in his voice, said, “Egbon, let me come back, I will settle you, I swear”, but the tout was ready for that. “I don close for today; na your money I dey wait, because I dey go for naming ceremony.”

Reluctantly, Taju handed him N200 without slowing down, but that posed no problem to the collector, who jumped down with practised ease and, sneered, “You think you wise, abi? I don dey for this job before you learn driving!”

Our correspondent, however, met with one of the motor park chairmen at a social party, along Brethren Street, some 120 metres from the Brethren Church, off Iyana-Ejigbo on the Mushin-Ikotun road.

Five of the men at the roadside party, each had a gold tooth displayed through drunken laughers and each wore expensive gold accessories. Empty bottles of assorted liquor littered the place and the men boasted about their conquests of women, their cars and stuff.

Daily Times learnt that the shop which supplied their drinks and meat was owned by the wife of one of the NURTW area fathers.

No cost was spared at the party; one fried snail cost N5,000 and the drinks cost thrice as much. This is a daily ritual after the NURTW chieftains collect their daily returns from their agbero foot soldiers, operating around Orioke, Iyana-Ejigbo, through NNPC to Jakande.

A resident in the area, who craved anonymity, disclosed that the chairman started out as an agbero, and, gradually, rose through the ranks, to his present position, just as is the case with many others.

The question agitating the minds of many Lagosians, is, how could the excesses of these ‘loading fee’ collectors be checked?

Is there no way the government could streamline their operations without inconveniencing the commercial drivers and by extension, the commuters, who always bear the brunt of the callous nature of the agbero?

Questions and more questions – all begging for answers