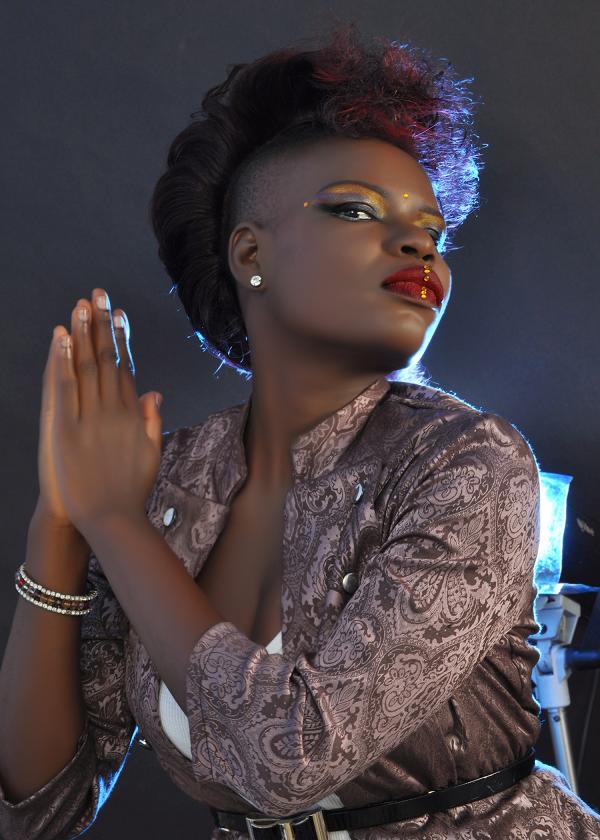 Married to her manager, Seyi Allen, Azeezat, one of Nigeria’s female talents who has been off the music scene for a while became an household name when she released “Hold On” years ago. Recently, Yinka Lawal caught up with her and she talked about her musical career, marriage, the rise of other female musicians among other issues.

What are you working on now?

I’m working on a song called Love your Self. It’s for female empowerment and I’m hoping to work with other female artistes to be able to achieve that.

What is happening to your music career? The last hit song you had was Hold On?

Hold on was my first album and since then I’ve released three more albums, but the dynamics of the industry have changed and maybe that is why you have not been hearing from me or about my other songs. But I’m still doing my songs, still recording songs and I’m working on another presently So, I keep keeping on because what is important is that I keep on doing what I love to do, keep dishing it out to the people and my fans and hopefully, more of my fans can hear good music from me soon.

You are one of the decision makers in COSON, how has taking up a job there affected you?

Rating your career from where you started, would say you are fulfilled?

It’s been wonderful. I mean, it’s my rightful journey and it’s fulfilling. I’ve recorded a lot of great moments. I’ve performed on big stages, many of which I can’t even remember again. Music has been very fulfilling for me. It has opened doors for me, and helped me to open doors for other people. Although, I still have a lot to do because I’m still recording in the studio, releasing new music and I’m sure that there are greater moments to come.

In recent times there has been a trend of many female singers taking the centre stage; don’t you feel threatened?

Threat? That is impossible. When somebody inspires you to do better; every chance I get I google their performances, songs, videos so as to be able to see what I can add to my skills and my branding. That cannot be a threat. I love a lot of them. I love singers like Tiwa, Chidinma, Omawumi, Waje and the new girl, Kumi who sang Ma Bi Mi Ni Jamb Question. My children would always disturb the house with their songs. I would love to work with any one of them.

With so much money involved in the entertainment industry now, do you have any regret about not being on top of your career?

Of course; because I’m a business woman and that is why I’m still in the studio that is why I’m working hard to be able to tap into what is happening now in the industry.

You have been married for some time now, as an artiste what has marriage taken from you?

Ever since I have been married, I do not have regrets about it. So, I don’t think I can honestly answer the question because I have not seen marriage as a platform that has taken away something from me. I see it as part of my life and I’ve been blessed by it.

The divorce trend in the entertainment industry is so high now, what has been upholding your marriage?

I’ve been able to sustain mine by knowing what is important. Marriages are full of ups and downs, but at every point in time, when you get to any stage in life, you would be able to ask yourself what is important at this point in time. There is a place for business and a place for marriage. You cannot sacrifice your marriage at the altar of career and vice versa. It also comes with having the right partner who understands the place of these two and then of course taking God first who is the superglue of all unions.

What are the qualities of a right partner?

It is very, very subjective, because I believe that a girl should be able to have a partner who loves her success more than she loves her success. Someone who understands the vision of where she’s going to and who will help to push her towards that and of course, you must have a friend who is understanding and the communication must be very effective. He must be somebody who is ready to communicate at all times, because this is very key.

Aside music, what would you have done better?

I think I would have performed better in business because if people are complaining now that they have not heard from me for a while and my business side has been better and I’ve understood business like I do now, that would not have happened.

What would you have done differently from your music career?

I would have had a stable source of income set up somewhere that I would be able to use to run my career.

Despite the fact that you are married, do you still get advances from men?

There are situations where I have misbehaved to a fan. I could remember once or twice and anytime I remember them I still feel a lot of regrets. But believe me, what I did was to check all other angles they could use to get to me. Personally, I hate those things; I can’t stand it. When I get into a conversation with somebody, I want to talk about something progressive. So, it irritates me when the person knows that I’m married and he is still trying to do certain things that I’m not comfortable with, despite my efforts to tell you that I’m not interested and it seems that the only thing that is left for him to understand is to be aggressive; then I have been aggressive.

Do you have any instance?

You said you want to take a picture with me and you are taking your hands to where you are not supposed to take your hands to. What do you expect a girl to do?

Why do you think most artistes find it difficult to sustain their fame?

I don’t like to comment on questions that might seem as if I’m judging, because you are not walking in some people’s shoes, so you do not know how the shoe is pinching them. But we all have challenges and sometimes some of those challenges, we cannot win. I would say some might not be able to sustain their fame, maybe they didn’t have enough talent. But I don’t think that what it takes to sustain your fame is all about talent. Sometimes there are lots of unstable structures in the industry to sustain one’s fame, so I think good structures in place should be able to sustain one’s creativity.