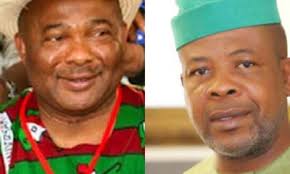 Tension has enveloped Owerri, Imo State capital and its environ following Last Tuesday’s unanimous judgment by the 7 judges of the Supreme Court that sacked His Excellency Rt Hon Emeka Ihedioha, the People’s Democratic Party (PDP) governorship candidate of March 9th , 2019 gubernatorial election and declared Senator Hope Uzodinma of All Progressives Congress (APC) who came fourth in that election as the rightful winner of the the election.

Ironically within the streets and roads of Owerri there is no evidence of jubilation as most people seem aggrieved over the court ruling.

The environment is charged as the many people are poised for violent protest.

Commenting on the issue, Hon Edwin Ekeigwe (Onwa Okigwe) ” The judgement is a democratic rape, the Federal Government wants to return Imo State to APC , Uzodinma is not popular in Imo State. This is a misplaced justice’’.

In the same vein, Chief Ejike Duruaku accused the Federal Government of masterminding the court ruling and called for Mass protest, adding ‘’that history and posterity will be unfair to the Judges and their alleged cohorts’’.

However, as the day rolled by, the Douglas House has maintained appear to have been deserted with very few of the workers and security personnel visibly sad.

To forestall any form of crisis in the state, security men have been strategically positioned with armored vehicles in front of the Government House,

Rt Hon Emeka Ihedioha private residence in Owerri popularly known as Billionaire quarters as well as other strategic spots. In the midst of all these, the immediate past Governor is yet to return from Abuja after the apex court judgment that cut short is leadership as governor.

However, Senator Hope Uzodinma, the man at the helms of Imo State affairs early morning Wednesday gave a radio broadcast to drum up support and cooperation of the citizenry assuring to continue from where Rt Hon Emeka Ihedioha stopped as Governor of the state.

He also appealed to Imo people to attend his swearing in ceremony scheduled to hold at Hero’s Square by 12 Noon.