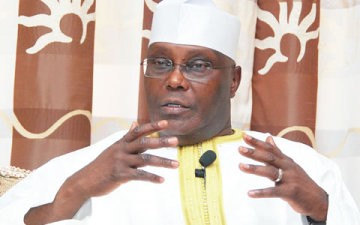 A former Vice-President and current chieftain of the All Progressives Congress, Atiku Abubakar, has said the Independent National Electoral Commission and security officials implicated in the conduct of last weekend’s governorship election in Taraba State should be replaced with new personnel before the rerun election in the state.

Atiku made the suggestion while welcoming INEC’s decision to cancel the governorship election results in some local government areas of Taraba State and declare the outcome of last Saturday’s polls in the state inconclusive.

This was contained in a statement released by the Atiku Media Office on Wednesday.

It quoted the Turaki Adamawa as agreeing with the widespread reports of irregularities in some local governments of the state.

Atiku said, “Elections should not be militarised. Nigeria is a democracy, not a dictatorship. Citizens should be able to go out and vote without fear of being threatened with the nozzle of a gun.”

He also said that election violations were perpetrated in Southern Taraba, specifically in Wukari, Takum, Kurmi and Donga local councils. Atiku noted that thousands of troops were deployed in these areas and electoral officers were heavily compromised.

“These people should not be allowed to go back during the rerun election. No troops should be allowed nearby,” Atiku said.

Atiku also called on the Inspector General of Police, Suleiman Abba, to replace the security personnel in Taraba with new hands from neighbouring Gombe, Bauchi and Adamawa states during the period of the rerun elections.