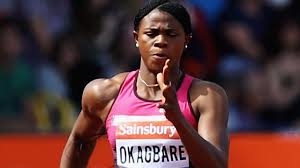 In one of the most anticipated contests of the night, Okagbare stormed home in 10.98 secs- her best for the season leaving the two Jamaicans to place fourth and fifth respectively.

Judging by this performance, both of Jamaica’s leading ladies, are some way off their best but there is still enough time for improvement before the serious business of the World Championships in August.

Veteran Campbell-Brown, 33, got a blistering start out the blocks but was not able to live with the speed and power of Okagbare-Ighoteguonor, finishing in a time of 11.22.

Olympic 100m champion Fraser-Pryce ended with 11.25 seconds to her name. By her standards she looked sluggish out of the blocks having the third slowest reaction time.

Fraser-Pryce said:  “It is a good start. I didn’t have any time in my head and no expectations. The feeling was OK. I am looking forward to my next 100 metres, what comes, comes.”