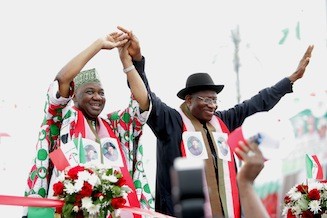 The President’s intervention during a closed-door meeting with the NWC members followed strident calls for the resignation of the national chairman of the party, Alhaji Adamu Mu‘azu and other NWC members for purportedly leading the party to its first defeat in a presidential election.

The president’s intervention was, yesterday, matched by calls from senior party members who also called on the warring members to pull away from the acrimony that has seen NWC members openly blame the President’s handpicked campaign managers for causing the defeat of the President in the election.

The call for ceasefire nonetheless, the crisis continued to smoulder with Chief Bode George, a former deputy national chairman of the party calling for the resignation of Mu‘azu from office.

Besides, Governor Ayo Fayose of Ekiti State stuck to his guns on the demand for the resignation of the NWC members, an assertion that drew the sharp response of a senior official of the NWC who reproached Fayose for biting the very fingers that fed him in his time of need.

The President’s plea for peace was matched by a number of stakeholders, including some members of the Board of Trustees, BoT, such as Chief Bode George, Chief Ebenezer Babatope, Chief Don Etiebet, the Lagos State chairman of the party and a retired Commissioner of Police, Alhaji Abubakar Tsav.

The president’s plea forced the national chairman, Mu‘azu, to withdraw a statement in which he had alleged that presidential aides were determined to destroy his legacy through their open conflict with the party officials.

A senior official of the NWC, however, replied a swipe by Governor Fayose earlier yesterday in which he reiterated his call for the dissolution of the NWC.

“It really hurts, I mean it hurts for Ayo Fayose to ask us to resign, considering the risks we took to ensure that we gave him a level playing ground to contest even when some members thought that he had no right being in the race,” the NWC official said yesterday.

In his reaction to the crisis, yesterday, Chief George, a former deputy national chairman of the party said: “Playing politics has to do with maturity. After any election, there is a way it is being done that any party that lost, the managers of the party will honourably bow out.

“There should be civility in anything being done but in the meantime, you cannot be a judge in your case. That is legitimate, that is sensible. All the noise about people collecting money here and there, to me it should not be so.

“You do not wash your dirty linen in the public. Do you think the All Progressives Congress, APC, do not have their filthy linen? With what they (PDP leadership) have done, they are sending shivers into the spines of Nigerians.

“We are going to readjust ourselves and strengthen all the structures from the wind that just blew us. You do not go to the marketplace and start describing the name and house of your father.

“The position we arrived at, at the Ado Ekiti meeting was the consensus of the party leaders after thorough deliberations which recommended that the National Working Committee should step aside for an independent group to reshuffle the party. If they found out that they (NWC) still need to be there, they will be recalled.

“I am shocked about the reactions of the people which now became an issue on the pages of newspapers. Which party in the world that is existing without internal wrangling? It is natural and normal.”

In his remarks, Chief Babatope said: “I am not personally interested in the tantrums that are being thrown at each other by presidential aides and the National Working Committee of the party. I believe the BoT should be meeting in about two weeks where some of these major issues will be thrashed.”

Babatope, who is a member of the BoT of the PDP, said: “I am only interested in what the outcome of the BoT meeting is and not this tantrum being thrown around.”

On his part, Chief Etiebet said: “I have nothing to do with the PDP so I cannot comment on their actions. It’s just a good feeling that all leaders are singing my song which I kept singing since last September that the PDP Governors Forum’s actions would spell doom for the party at the polls.”

Speaking on the current controversy in the party, the Lagos State chairman of the PDP, Mr Shelle said: “I just don’t want to be part of the controversy.”

He, however, urged the leadership of the party not to play the blame game.

Shelle said: “The blame game cannot help our cause. We should start putting our house in order to be able to get rid of those that stole our mandate through conspiracy by the compromise of the Independent National Electoral Commission, INEC, and the Police.

“We as a party only played into their hands. We will bounce back because the so-called APC is PDP in another form. Those who sold out are, however, advised to bow out of office before they are exposed.”

PDP was taken over by Mrs. Jonathan, Fani-Kayode, Fayose —Tsav

Similarly, a retired Police Commissioner, Alhaji Tsav, said: “When the PDP was formed with pomp and pageantry some years back, its members boasted that it was the largest party in Africa. Some at a point boasted that it would rule for 60 years and beyond. Things went right, and everything flourished in the party. Everybody went for the umbrella but today, the situation has changed and the umbrella is leaking profusely not only from torrential rain but from the rays of the tropical sun.

“Most of the founding fathers have left the party in anger ranging from lack of internal democracy to encouraging illegality. The situation was worsened by the departure of former President Olusegun Obasanjo, who is an institution himself.

“The party was taken over by Mrs Jonathan, Gov. Fayose, Mr Femi Fani-Kayode among others. Imagine the First Lady inciting people to be violent during the campaigns. She also brazenly insulted the people of the North and a former Head of State without due regard to the party chairman, who is from the North. Fayose and Fani-Kayode also engaged in the hate campaign against the opposition. The opposition was focused and never left the substance to pursue the shadow.”