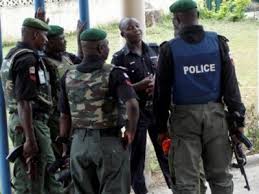 Policemen yesterday tear-gassed the Speaker of the Niger State House of Assembly, Isah Kawu, and 20 other members and staff of the Assembly.
The main gate to the Assembly complex was blocked by a Hilux van while armed policemen formed a human barricade around the complex’ fence.
The move was part of attempts to stop the lawmakers from commencing impeachment proceedings against Governor Mu’azu Babangida Aliyu.
Trouble started when the policemen ordered the new Speaker who was elected on Tuesday, and 20 other members out of the assembly complex.
The police and other security agents locked up the gate to prevent the coming in or going out of people, especially the assembly workers.
Irked by the development, the lawmakers tried to break the padlock while the policemen used tear gas to disperse them, thus causing pandemonium in the complex.
The lawmakers led by the new Speaker, Hon. Kawu and 20 House members left the complex to meet at an undisclosed location, assuring journalists that they will call them later for a press briefing.
Their next line of action could not be ascertained as at the time of filing this report.
Niger State Commissioner of Police, Mr Olusola Amore, declined an interview with newsmen during his visit to the House of Assembly.
Hallmark learnt that the police action was informed by fears that the new Speaker along with 20 lawmakers had perfected plans to begin impeachment proceedings against Governor Babangida Aliyu on allegations that he had failed to carry members of the Assembly along in the governance of the state and other acts of misconduct.
About 300 armed policemen and other security agents were deployed in the Assembly to ensure that the legislators could not conduct plenary for the day.
The embattled Speaker, Mr. Adamu Usman, who was reportedly impeached on Tuesday, insisted that the new leadership was illegal
“What they did is unconstitutional, null and void and of no effect. We are still the leaders of the House of Assembly. I am happy they did not accuse any of us of financial mismanagement,” he said.
Meanwhile, Niger State governor, Dr. Mu’azu Babangida Aliyu, has exonerated himself from the crisis rocking the state House of Assembly, saying the face-off “is internal.”
Aliyu, who said he was not targeted for impeachment by the lawmakers, insisted that the crisis has nothing to do with him.
The governor in a statement issued by his Chief Press Secretary (CPS), Israel Ebije, said speculations of impeachment moves against him by the Assembly were false and should be treated as such.