Home Business Onasanya to bow out, as First Bank glides on 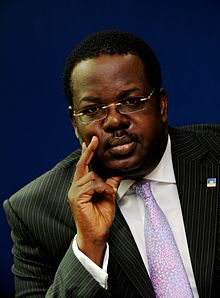 … He brought modern banking to the institution–Analysts
After piloting the affairs of First Bank of Nigeria, a subsidiary of FBN Holdings plc as Group Managing Director/Chief Executive officer for almost 2190 days, Mr Bisi Onasanya is set to take a bow by December 2015.

According to a press statement signed by Mrs Folake Ani-Mumuney, Global Head, Marketing & Corporate Communications and made available to Hallmark yesterday, Mr. Onasanya is retiring on the heels of an inspiring and enviable career spanning over three decades of diverse management and operational experience, 21 years of which he has spent with FirstBank, serving meritoriously in the last six years as Group Managing Director/CEO. The statement stated that Onasanya  has been able to stabilise and modernise the expanding FirstBank brand since his appointment in 2009, thus reinforcing the confidence of the bank’s diverse stakeholders and the global financial publics.
It also said that Mr. Onasanya’s successor will be announced in the last quarter prior to his exit.

A seasoned banker and chartered accountant, Mr. Onasanya is a highly respected and personable executive who has established a reputation at FirstBank for solid performance and sound judgment, said the statement.

‘’ He is widely reputed as the architect of the modern FirstBank, associated with various innovative and creative achievements. He was Project Coordinator of Century 2 the new frontier, FirstBank’s far-reaching enterprise transformation project at the turn of the century, as well as Project Coordinator of the FirstBank Corporate Transformation project which has seen the bank accentuating its foothold on modernisation. Mr. Onasanya also superintended the latest composite Corporate Identity/Brand Refresh of the FirstBank Group, a bold step heralding the international expansion of the FirstBank brand.’’

The market has remained abuzz since the announcement and analysts have said that First Bank’s boss will be remembered for many things.
Dr. Richard Mayungbe, a financial analyst reckons that Mr.Onasanya brought a lot of re-engineering and innovation in the bank as well as improved the human assets of the financial institution.

Chairman Independent Shareholders Association of Nigeria, Mr. Sunny Nwosu concluded that Onasanya played huge role in creating the holding company structure which enhanced the value of its shares to stakeholders.  During his time Nwosu added Onasanya did not only grow the bank, but also supported many businesses with loans.

‘’Onasanya has done well and one needs time to really do justice to all his achievements in the bank and the banking industry’’ he also said.

President Association of Stockbrokers of Nigeria (ASHON) Emeka Madubuike told Hallmark in a telephone interview that looking at Onasanya’s performance from the capital market perspective is satisfying given that First Bank is a foundation stock.  ‘’He has done well’’ said he

The bank further described Onasanya as a corporate strategy and development pacesetter, who ensured the steady internationalisation of FirstBank, which under his leadership now boasts of subsidiaries with operations across Africa, Europe, the Middle East and Asia.

‘’He is also reputed as a people person having pioneered significant transformation in the development of staff at FirstBank. His tenure saw the transformation of the bank’s training centre into FirstAcademy, a best in class corporate university that recently clinched the 2015 Global Council of Corporate Universities Award for best impact by a corporate university on the implementation of business strategies. The bank has also received the highly coveted Best Place to Work award.

‘’An articulate and insightful thought leader in the financial services industry, Mr. Onasanya has made meaningful contributions as a member of the Bankers Committee and is the Chairman of the Sub Committee on Ethics and Professionalism. He has served as a member of the Chartered Institute of Bankers Sub-Committee on Fiscal and Monetary Policies and a member of the Presidential Committee on Reduction of Interest Rates. He has also delivered several papers and served on various conferences C-Suite panels across the globe. He is Editor of the new book, “Perspectives on Banking in Nigeria”, featuring a collection of learned articles by banking and finance professionals including operators, regulators and academics.

‘’Mr. Onasanya is a Director of Africa Finance Corporation (AFC) and has been Chairman of First Registrars Nigeria Limited, Kakawa Discount House Limited, FBN Bank UK Limited and Unified Payments Limited. A Fellow of the Institute of Chartered Accountants of Nigeria he is also an Associate Member of the Nigerian Institute of Taxation and a Fellow and Member of Council of the Chartered Institute of Bankers. Mr. Onasanya was early in 2015 honoured as The Sun Man of the Year 2014 and Newswatch Daily Man of the Year 2014 respectively, in recognition of his outstanding contributions to national development in the financial services industry.
‘’Under Mr. Onasanya’s leadership FirstBank has been back to back winner of both national and international awards, having been named “The Best Bank Brand in Nigeria” four times in a row – 2011, 2012, 2013, and 2014 – by the globally renowned “The Banker Magazine” of the Financial Times Group. For four consecutive years, 2012, 2013, 2014, and 2015 FirstBank has been named the “Best Retail Bank in Nigeria” by the Asian Banker International Excellence in Retail Financial ‘’Services Awards.