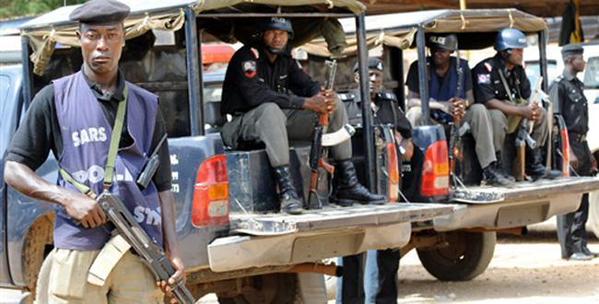 Police anti-robbery team attached to the Delta State Police Command, Asaba, on Monday evening arrested six robbery suspects while one escaped in Umuagu Quarters, Asaba, after their attempt to rob motorists and residents of the area failed.

It was gathered that the robbery syndicate stormed the quarters with Ak47s at about 7:30pm and descended on their victims, shooting sporadically but unfortunately for them, neighbours called the police to the scene.

Eyewitness said the armed men shot sporadically into the air in one of the shops in the area after which they took to drinking beer left in the fridge in the shop.

Police public relations officer in the state, DSP Celestina Kalu, confirmed that the suspects were arrested following a distress call to the police around Maduamezie Hospital, adding that one of the criminals escaped arrest.

Officials of the local vigilante group operating in the area who did not want their names in the print said his men had arrested no fewer than 16 robbery suspects in the last three months, adding that they were handed over to the police .

Sources said rampaging armed robbers have been terrorizing residents of Umuagu Quarters in Asaba, in most cases allegedly rape some of the women, an act described by Ogbueshi Onoiche, one of the elders of the quarters, as a taboo. He called on the security agents to redouble their efforts to curb their menace.

Speaking further, DSP Kalu said the suspects would be charged to court on completion of investigation, adding that two of the suspects sustained bullet wounds.